Beinecke Library is one of those amazing non-hidden structures…if you know how to stare at it. It also reflects the wonderful collaboration between engineers and architects. Paul Weidlinger and Gordon Bunshaft (from SOM) were the engineer and architect in charge of the design of this beautiful building.

It sits in the heart of Yale Campus, New Haven, Connecticut, and it is one of the few modern buildings around it, as Gothic style stands out. This “rare book and manuscript library” is one of the largest facilities of this kind in the world (86′-0” x 130′-0” x 58′-0” above ground).

Construction started in 1960 as a six-story above-ground structure supported only by four big corner columns, following Weidlinger and Bunshaft design. Under the plaza where it was built there are some other spaces used as offices and workrooms.

Well-known by his glass curtain walls, Bunshaft placed one inside the library, as a tower to house books. Apart from that, the inside is a huge fully open space. As you can see, there are no “common windows”. To protect the “rare objects”, the façade has 1-1/4” thick marble panels allowing the daylight to penetrate the interior while blocking the heat and harsh rays of the sun.

The longest side is 130’ long, it has 5 stories above and it’s only supported at the ends. That implies a huge span for gravity loads and, on the other hand, the building doesn´t have any interior floor to act as a diaphragm and carry the wind loads to an interior core. So, how was the resisting structure of this building designed?

As you may know, when designing a beam, the bigger the span, the deeper the beam has to be to resist the loads with a reasonable deflection. When spans increase and full stem beams are not efficient anymore, trusses become a better option. They take advantage of basic Materials Resistance: the farther the sectional fabric is from the neutral axis, the greatest is its contribution to resistance against bending. Among trusses, if the elements are hinge-connected, the loads decompose in axial forces through the elements. On the other hand, if we provide a moment connection between the elements, we can take advantage of bending resistance plus the axial capacity. In this group we find the Vierendeel trusses, which are not classical triangulated trusses but they have rectangular openings and its members are moment connected (if not, it wouldn´t be stable). We can say they work as a frame.

The Beinecke Library designed was conditioned by two desires: big interior open spaces and many (although covered) windows. So they put the structure in the perimeter… the façade is the main structure! It works at the same time as the gravity and the lateral system. For gravity loads (self-weight, dead loads, live loads, snow loads) it works as a multistory structure composed of multi-panel frames. Easier, it is composed of five Vierendeel trusses one over the previous one, working together. That makes a deep system, and that means more rigidity and less deflection. When dealing with lateral loads, the deflection is due to shear and overturning moment. The more vertical elements in the structure, the bigger shear resistant area will exist, and so less lateral deflection we´ll have. The Vierendeel truss is like a “multileg frame”.

Having this great idea, they designed this big library with facade trusses composed of prefabricated, tapered steel crosses covered with gray granite on the outside and supported in only four pin joints reinforced concrete corner columns, resulting in a very stiff structure for both gravity and lateral loads. 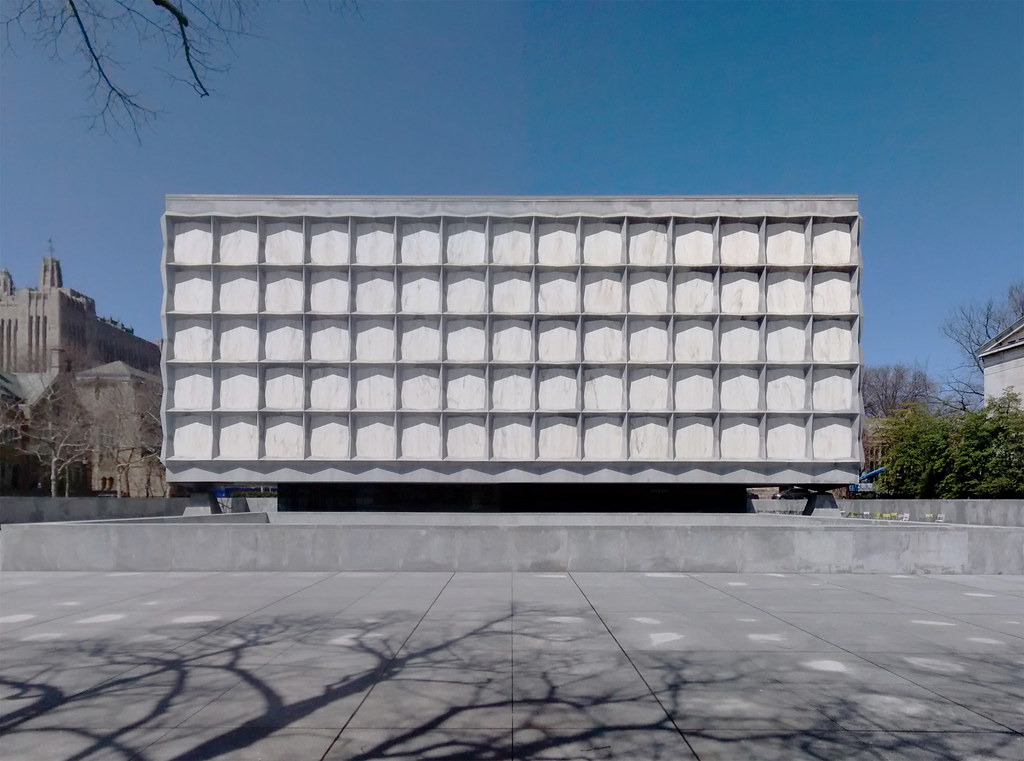 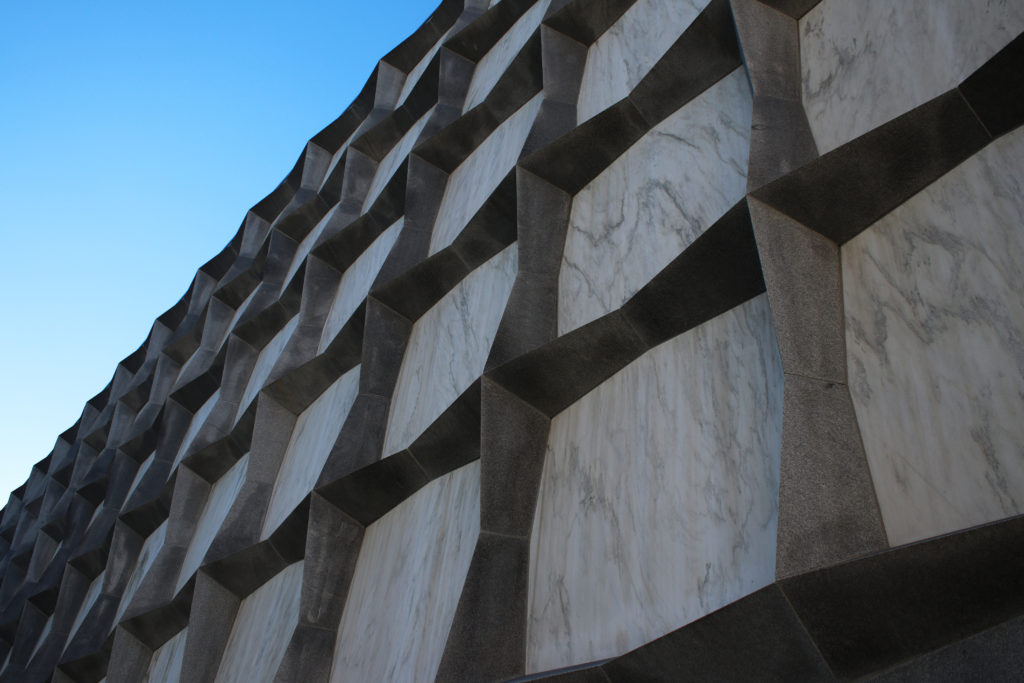 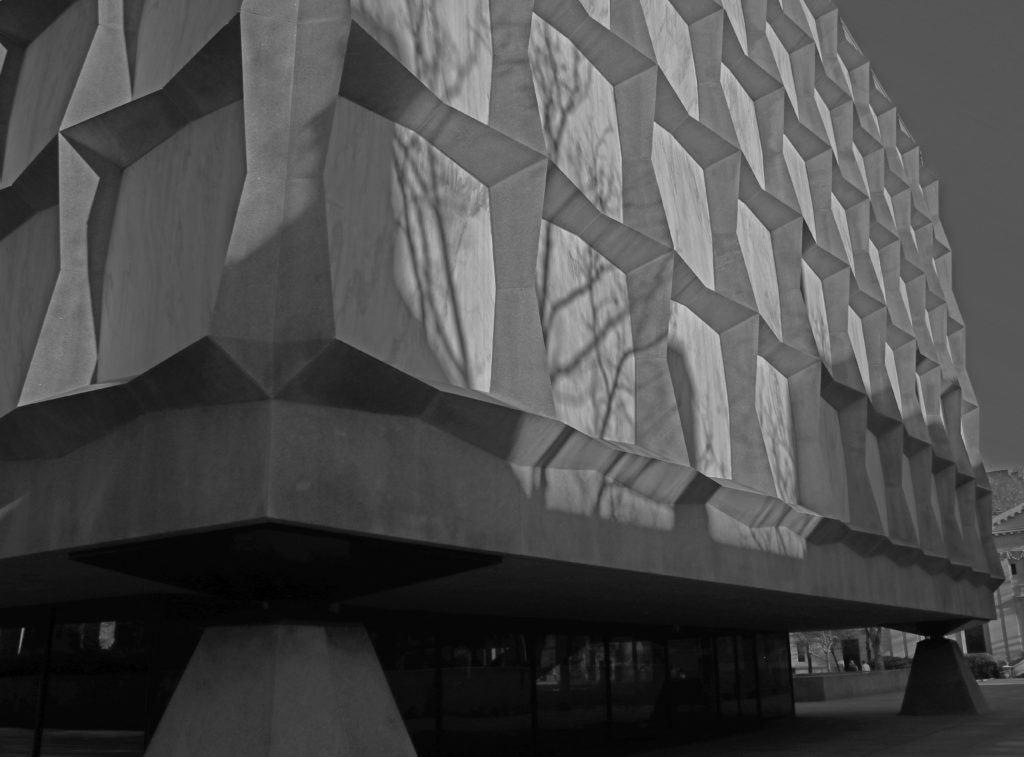 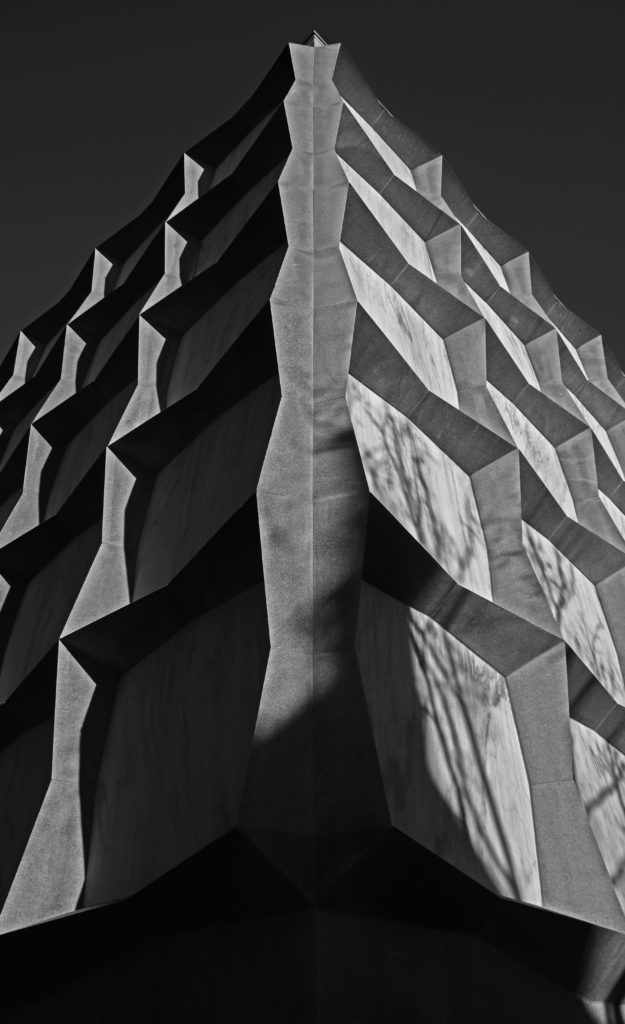 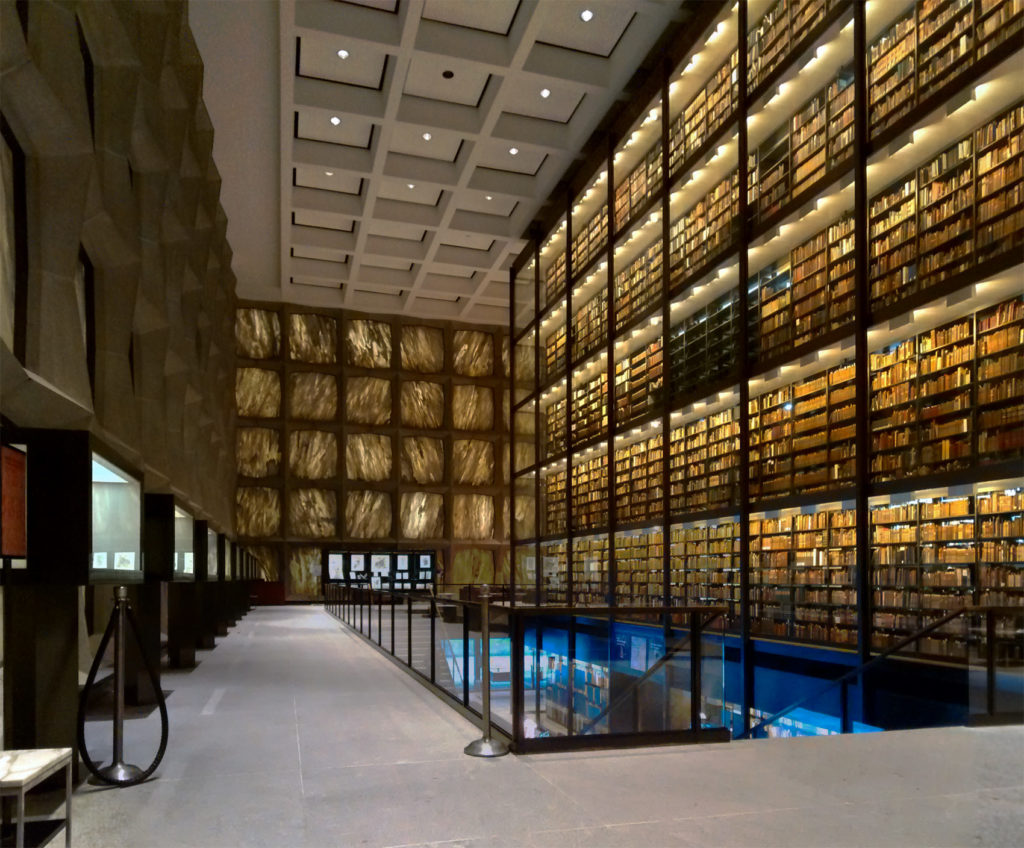 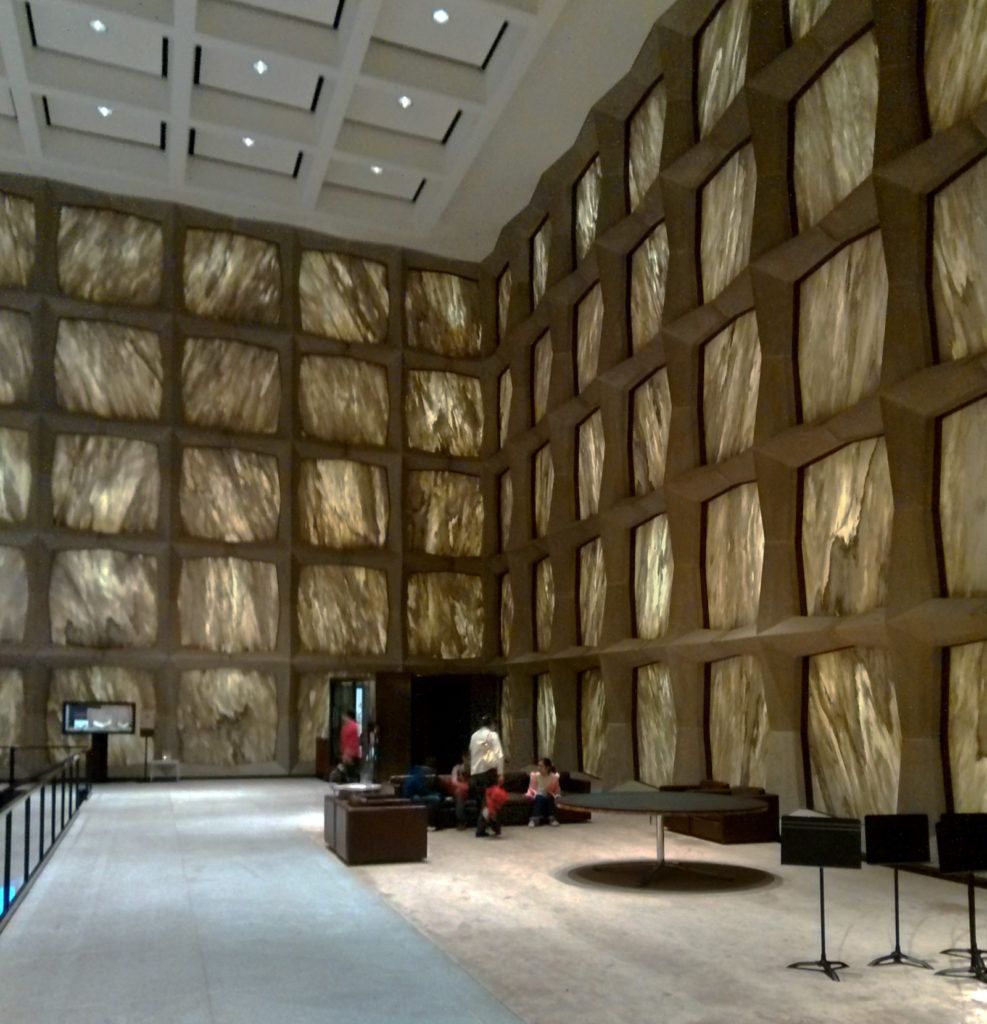 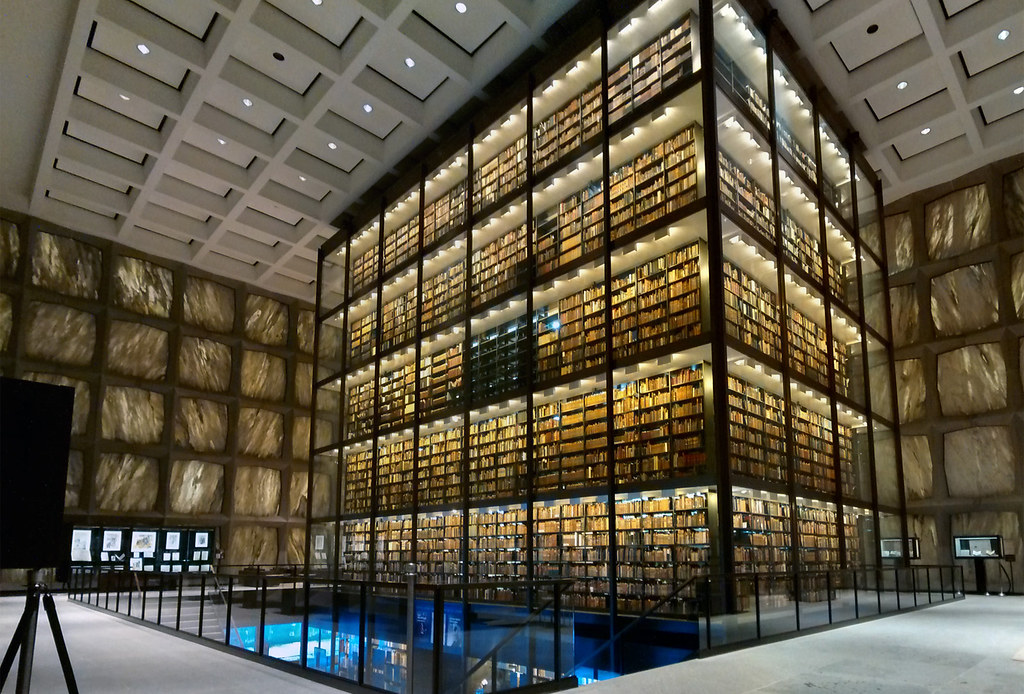 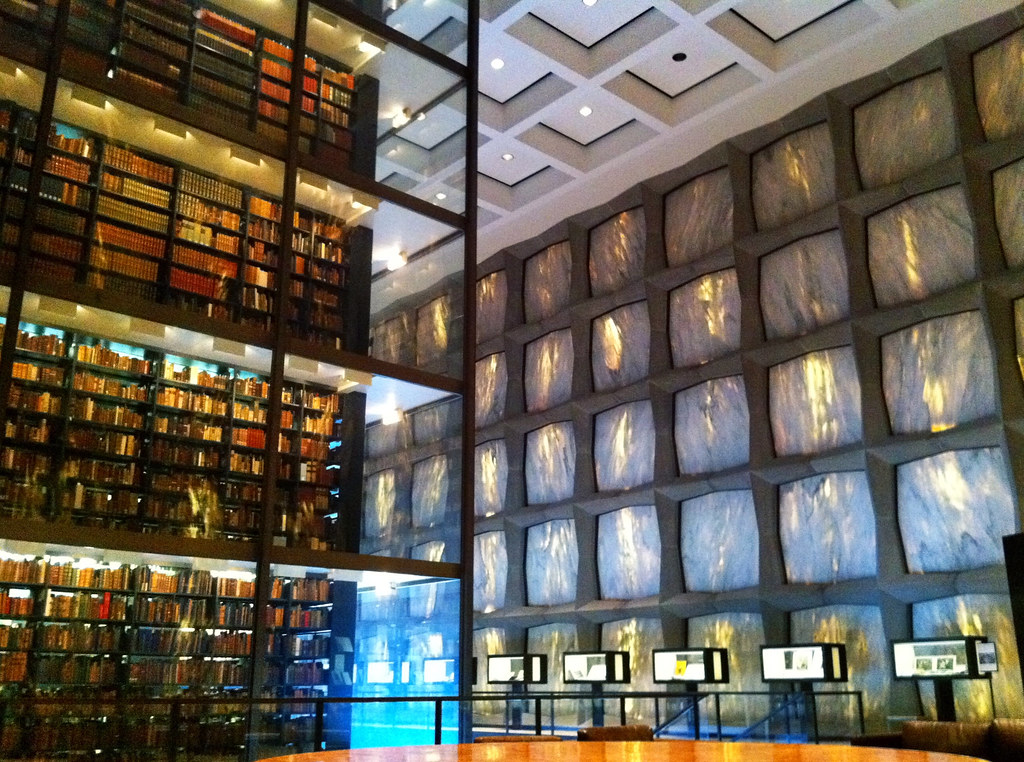 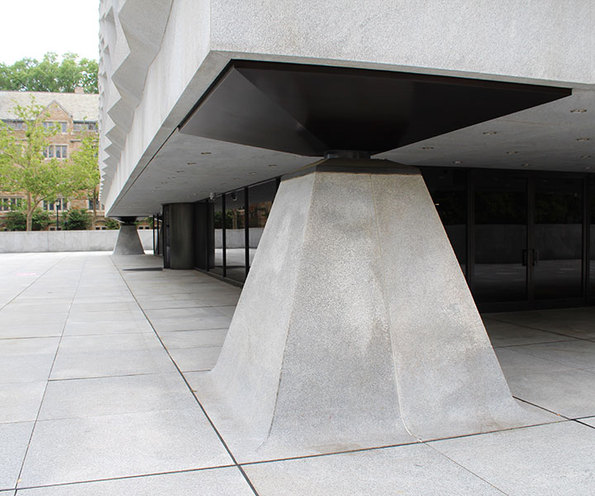 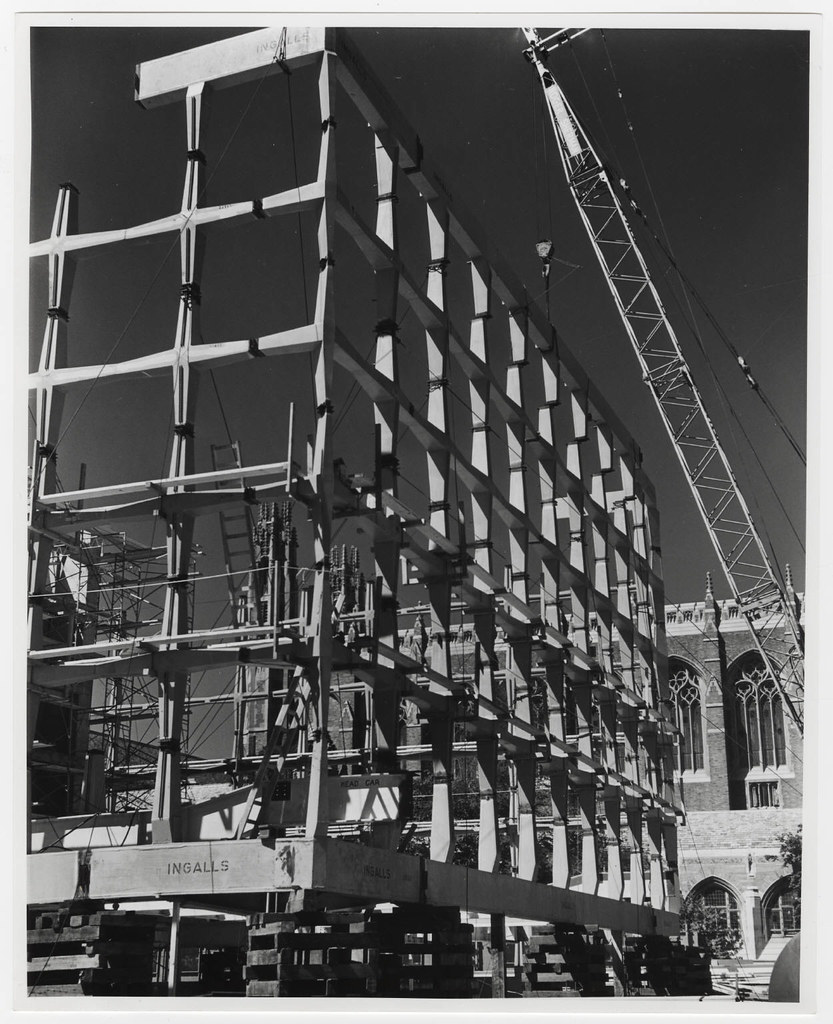 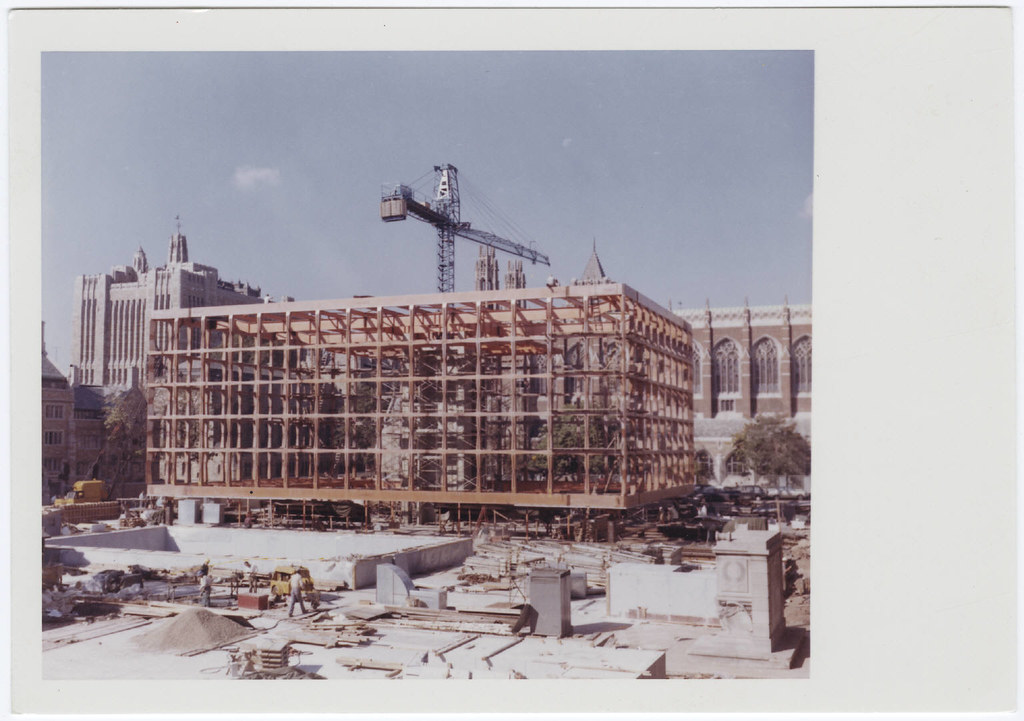