The Samuel Beckett Bridge is one of the many bridges that crosses over the River Liffey in Dublin, Ireland. It joins Sir John Rogerson’s Quay on the south side to Guild Street and North Wall Quay in the Docklands area. The bridge was named after Samuel Beckett, Nobel Laureate, to complement the sister bridge, James Joyce, located up stream.

It is an asymmetric cable-stayed bridge with a length of 123 m and a span of 95 m, having two pedestrian and cycle tracks, two traffic lanes and two lanes dedicated to buses. It may be adapted to accommodate trams in the future. The designer, Santiago Calatrava Arquitects & Engineers, together with the local engineering firm Roughan & O’Donovan, made the shape of the pylon and its cables as to evoke the image of the national symbol of Ireland: the harp.

Also, the bridge opens by rotating 90 degrees over its pier, as the Dublin Docklands Master Plan from 1997 required that all future bridges within the area have this characteristic in order to facilitate the shipping movement.

The steel structure of the bridge was constructed in Rotterdam and then transported to its final location in Dublin. Let’s discover this engineering masterpiece.

Cross section of the deck

The width of the bridge is around 27 m, and it has two pedestrian and cycle tracks plus four lanes for vehicles. Two of these lanes can be adapted to accommodate trams in the future.

It is a steel multi-cell box girder from which the ribs and steel decking forming the pedestrian and cycle tracks cantilever. The top plate of the box is only 14 mm thick, but it has 12 mm trapezoidal stiffeners every 0.5 m. The back span houses the counterbalance (concrete and steel) and the plates are not stiffened.

It has a 36 mm mastic asphalt layer and there are expansion joints at both ends of the bridge.

The cable-stays are locked coil cables, that is, they are formed by strands arranged in concentric layers about a central one.

The front span is supported by 25 cables of 60 mm in diameter set in a ‘harp’ formation.

There are 6 stronger cables in the back with a diameter of 145 mm.

Supporting concrete pier under the deck and foundation [1]

The pylon is curved and inclines northwards, rising to a point of 46 m above water level (total height around 54 m) and the stays are attached to it. Its base is set outside the river’s central navigation channel.

Its support consists of a circular concrete pier of varying diameter sitting on a foundation made out of bored concrete piles and a concrete pile cap.

The concrete pier has an outer diameter of 8,6 m at the base and 15 m at the top, with a height of 10 m. Inside, there is a 10 m long central steel tube with a diameter of 2,5 m and a plate thickness of 120 mm, which is welded to the deck below the base of the pylon, to transfer the load to the pile cap below.

There is a main vertical bearing at the bottom of the cylinder that transfers the vertical load to the lifting cylinders (that allow the elevation of the deck to rotate) and from there to the pile cap, while the moments are taken by two horizontal bearings encircling the central steel tube 5,35 m apart on the top of the pier.

The pile cap below the main support is a heavily reinforced concrete prism of 15x15x3 m. It is supported by 18 1,2 m diameter bored cast-in-place piles. The underside of the pile cap is approximately 13 m below high water level.

In order for the bridge to rotate 90°, its center of gravity (without live load) has to be centered within the main support pier. There is a central steel pipe that is raised 75 mm off the main rim support by 5 hydraulic jacks and then rotated by 2 large hydraulic rams working as a push–pull system.

When the bridge is closed, it sits on a continuous horizontal elastomeric bearing ring on the rim of the support pier, and it is kept into position by two pairs of locking pins at each end, that are inserted into housings cast into the abutments.

The expansion joints at each end of the bridge are formed by movable steel boxes, which are controlled by hydraulic rams, so that pressure can be released or increased, allowing the bridge to expand, contract, and be free to open.

The electrical control cabinets, hydraulic tanks and electrical pump units are all located within the bridge deck structure close to the base of the pylon.

This special bridge was designed for two different situations, as it has to resist live loads (traffic and pedestrians) when closed, but it also has to bear its own weight when it’s opened and only supported on the pylon.

The worst case of analysis is the opened situation, where forces and deflection of pylon and deck had to be minimized by designing the counterbalance in the back span, mass of the elements and forces in the cables.

Structural design characteristics of the different elements are:

The construction started with an installation of a 20 m square AZ46 sheet piled cofferdam, driven to the top of the bedrock (about 3 m deep in the soil), in order to build the foundation. Walers and struts were progressively installed as the cofferdam was dewatered. It was necessary to place concrete as a bottom strut before the cofferdam could be completely dewatered. Pressure relief wells were installed to avoid the excess of pressure in the rock underneath and work in safe conditions.

Installation of the foundation bored piles was performed with the piling rig placed into the base of the cofferdam in order to achieve more precision.

After that, they cast the concrete pier, using a complex formwork that was designed for the curved top part.

The construction of the bridge itself was the most distinctive feature. The design of the deck and the pylon was split in different sections that were made up, painted and then joined together. All these was performed in Rotterdam, so the whole bridge was later transferred onto a seagoing barge and transported to Dublin. Some railings and street furniture had to be temporarily removed from the East Link Bridge in Dublin as it was the narrowest place to cross. The Konigshaven Bridge in Rotterdam was the lowest cross.

Finishings such as waterproofing or asphalt were applied.

Samuel Beckett Bridge was opened by the Lord Mayor of Dublin on December 10th, 2009.

You can interact with this 3D model by Le Corb: 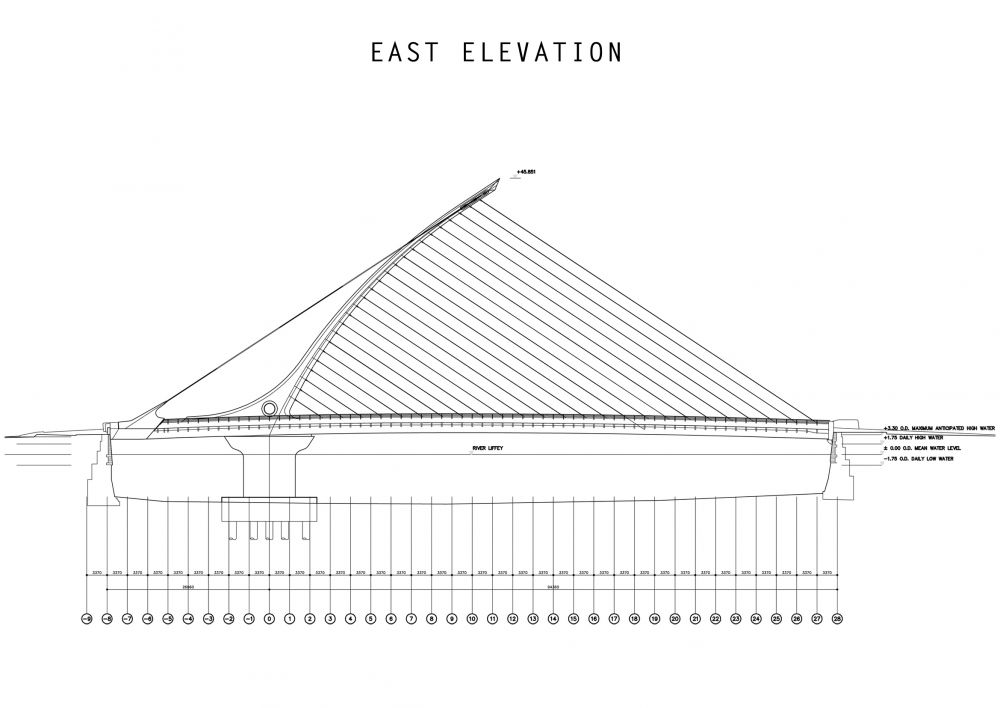 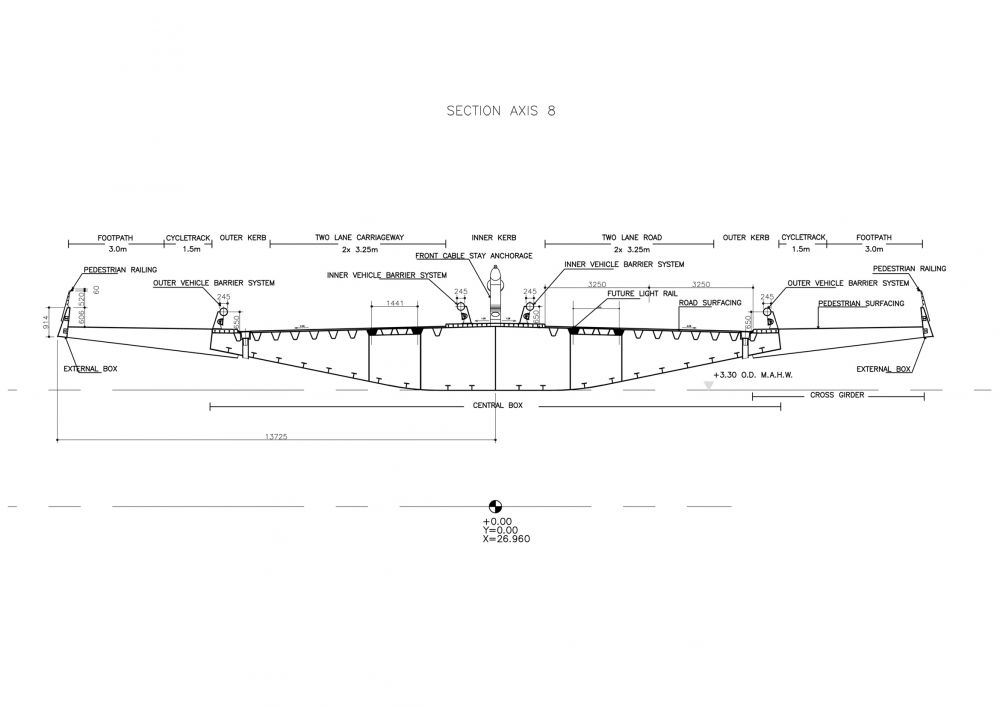 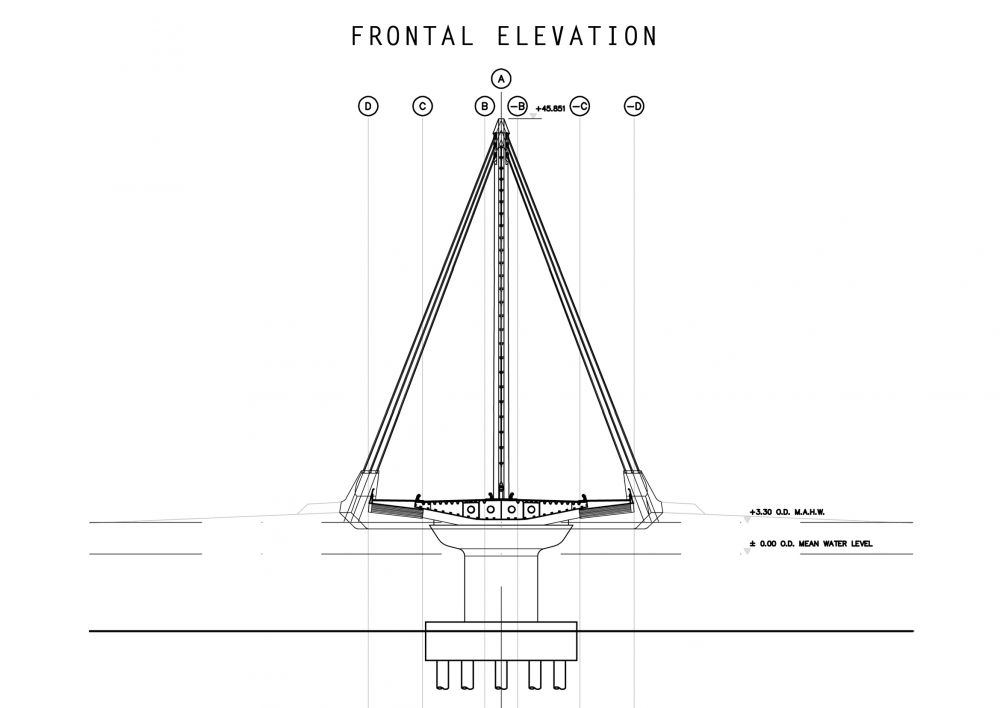 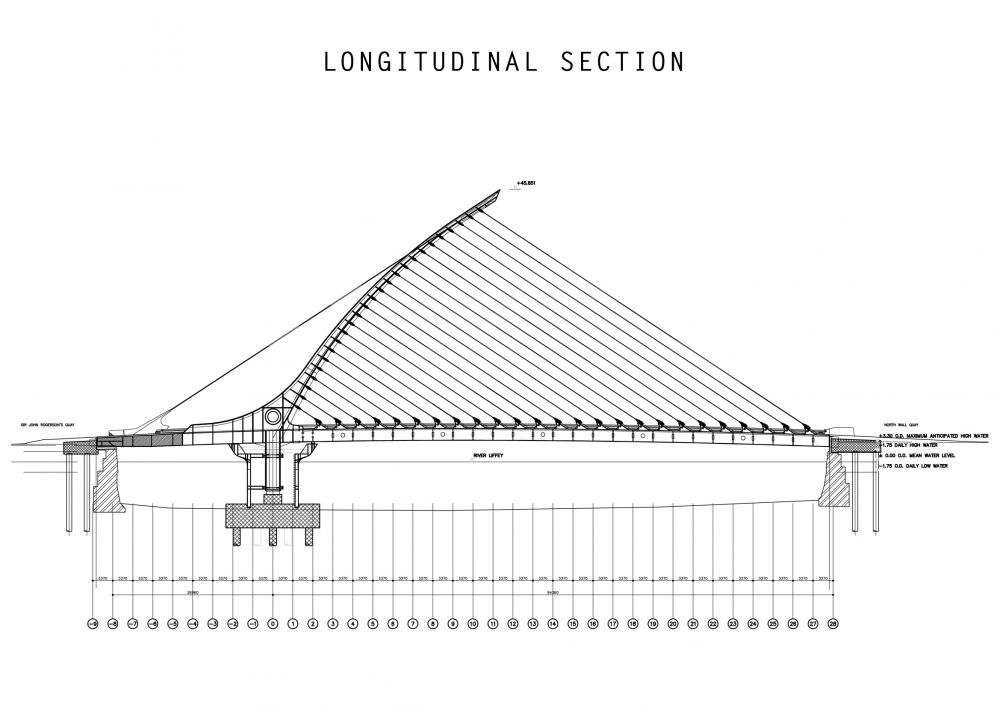 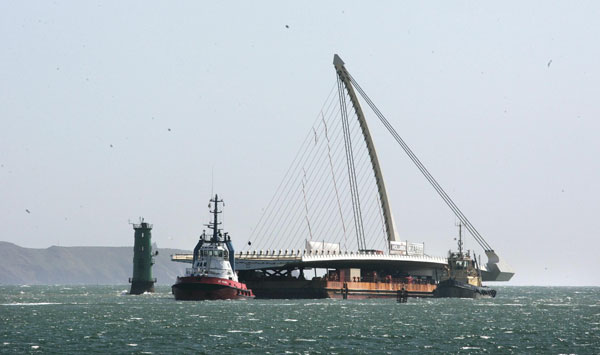 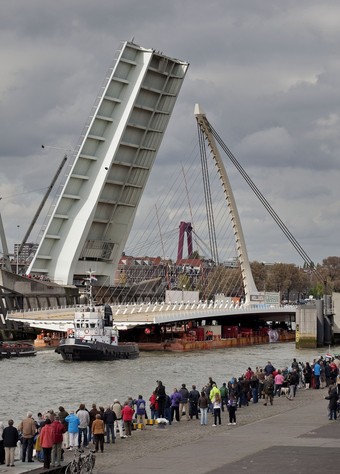 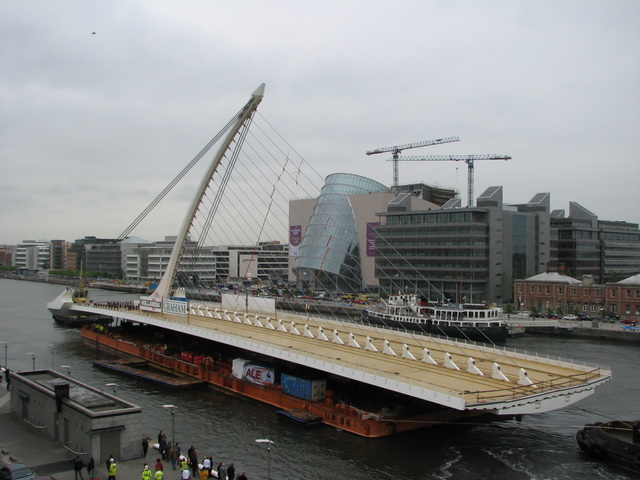 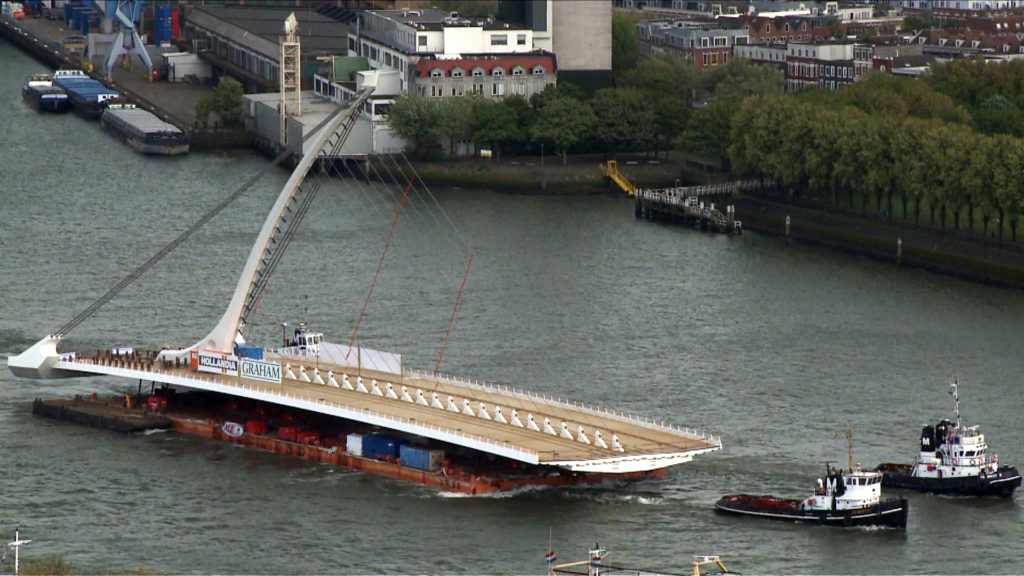 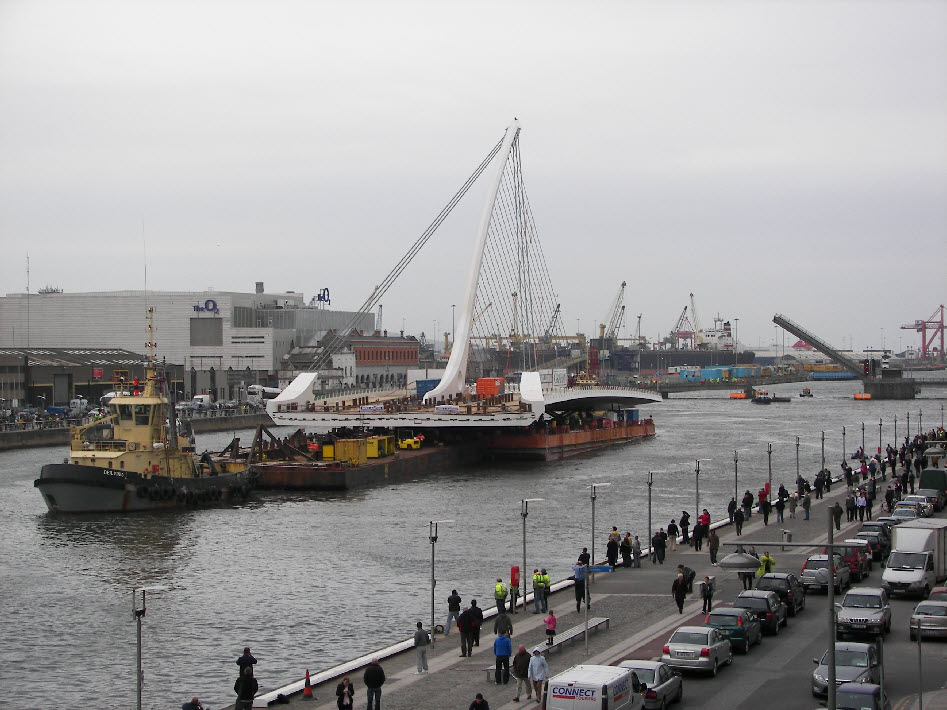 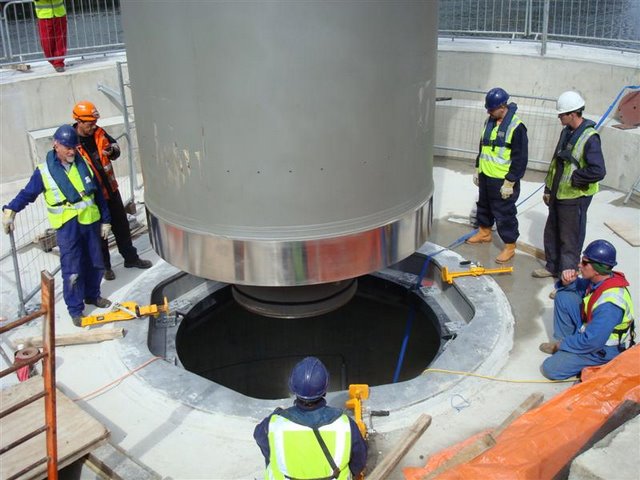 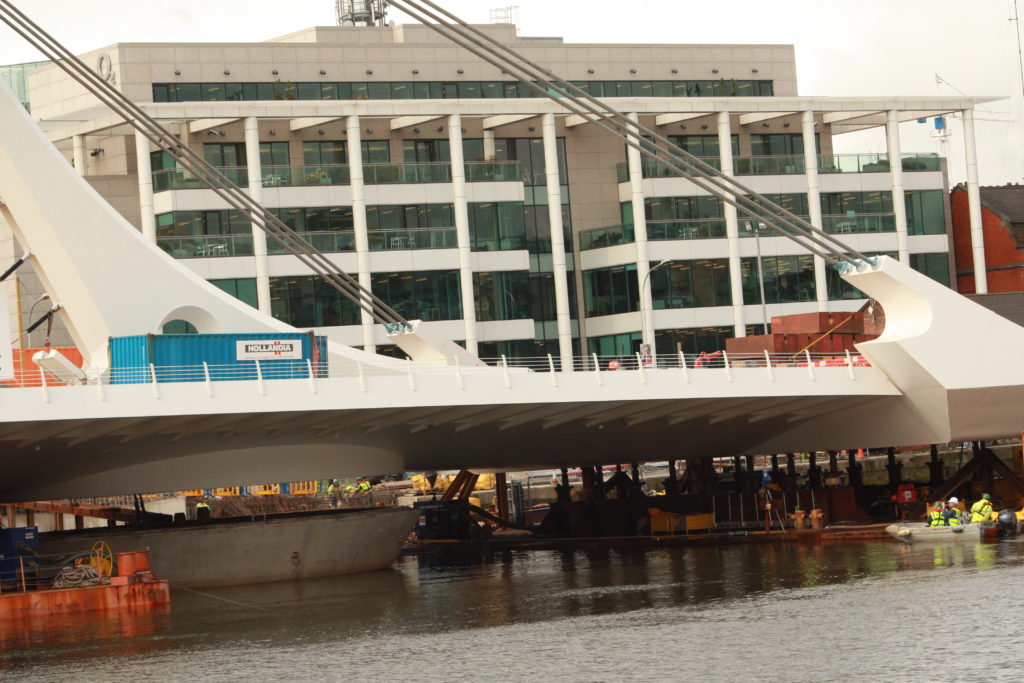 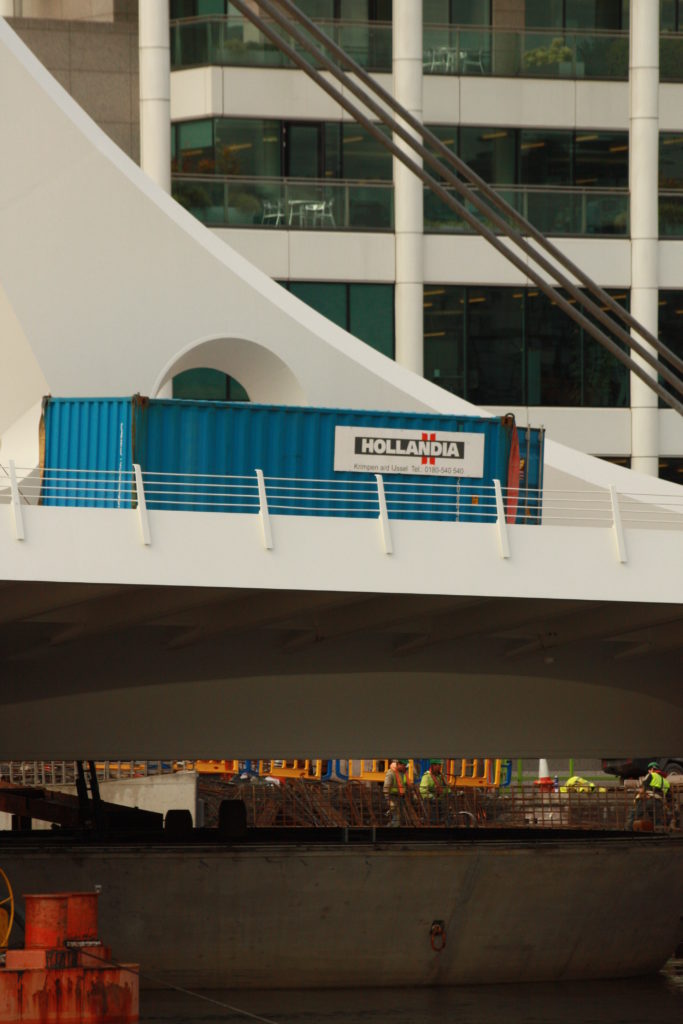 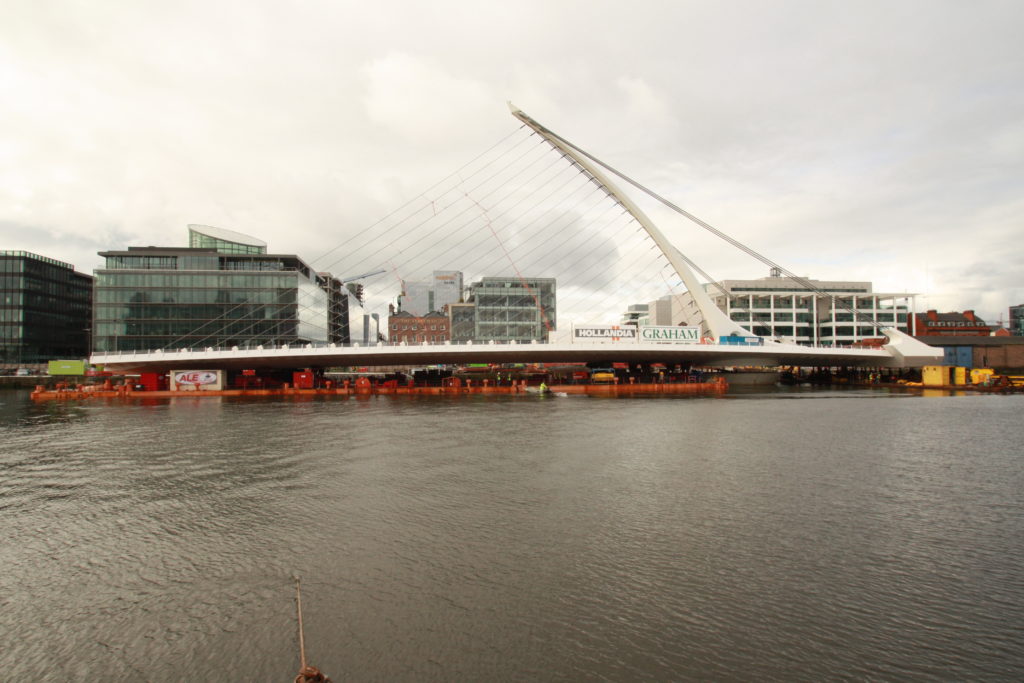 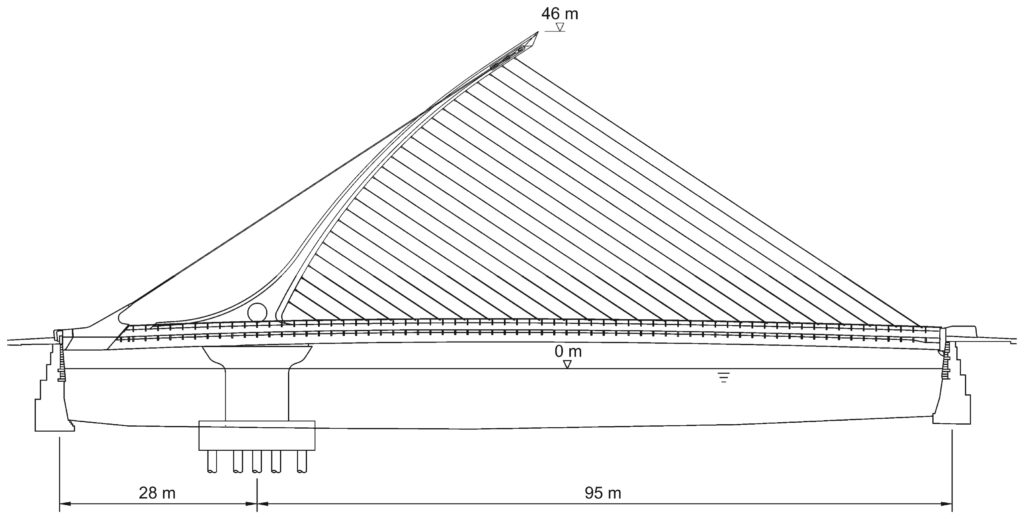 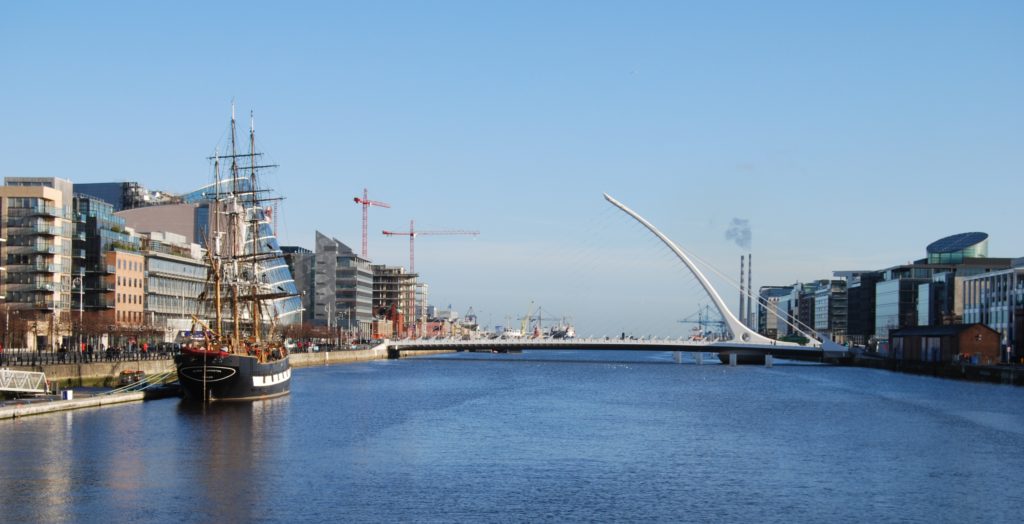 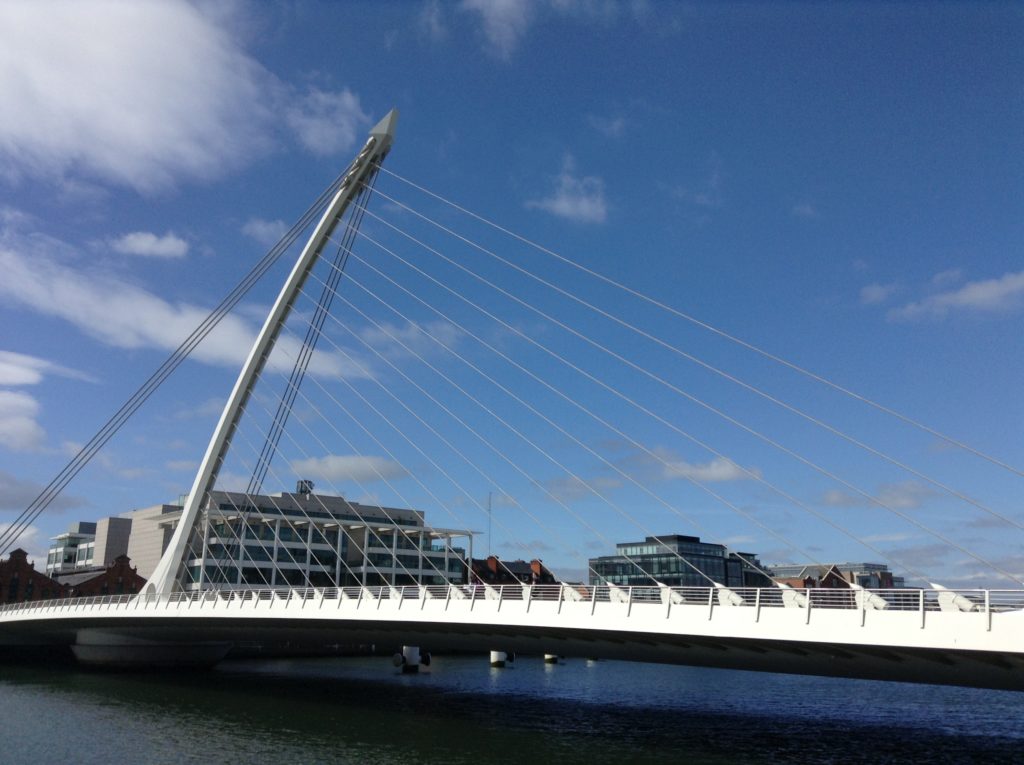 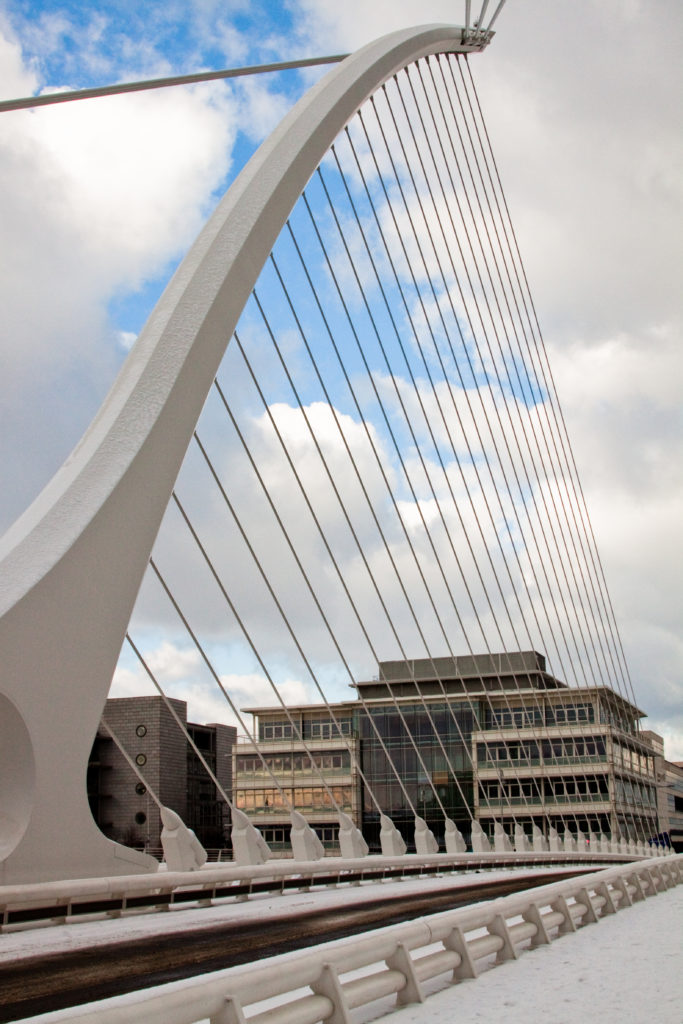 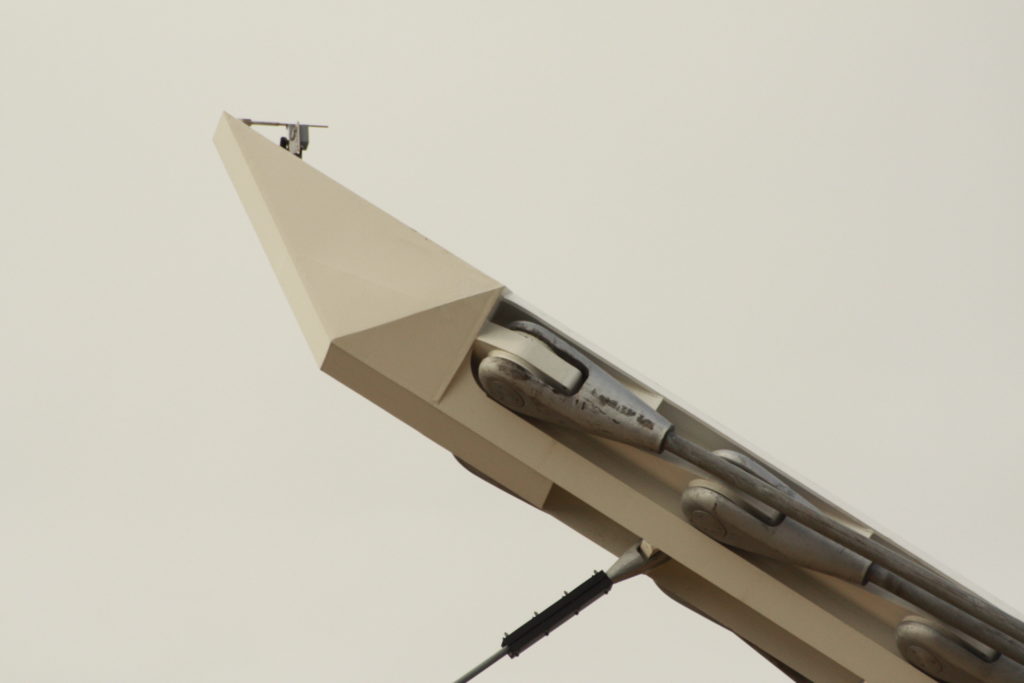 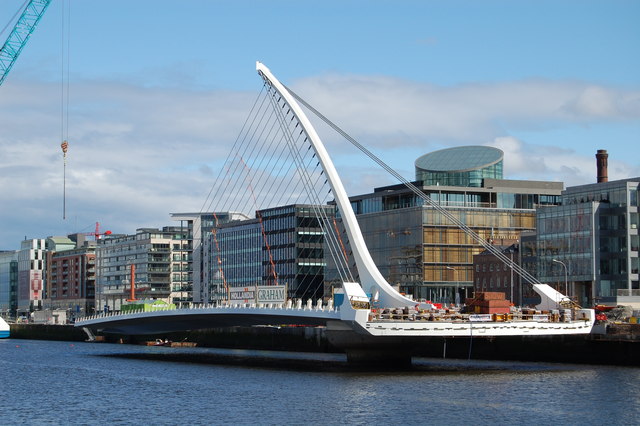 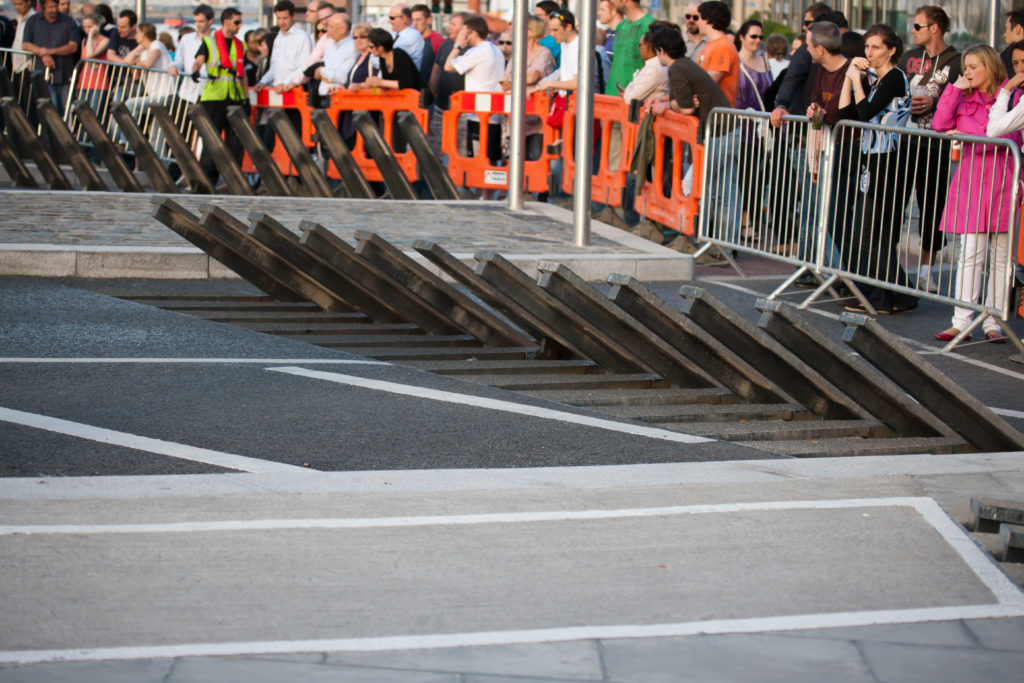 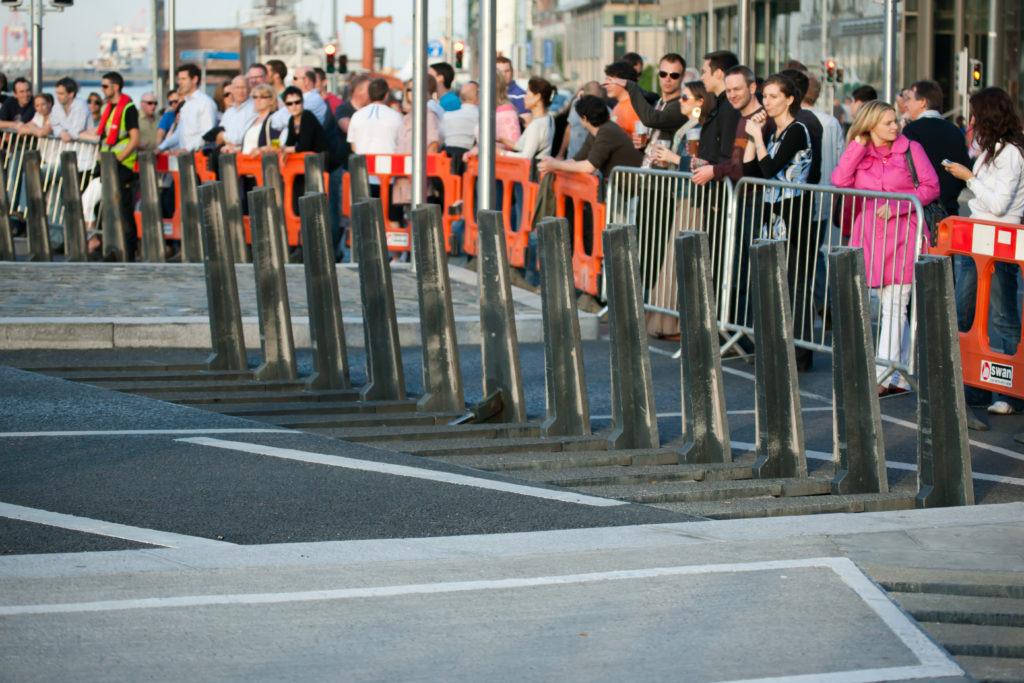 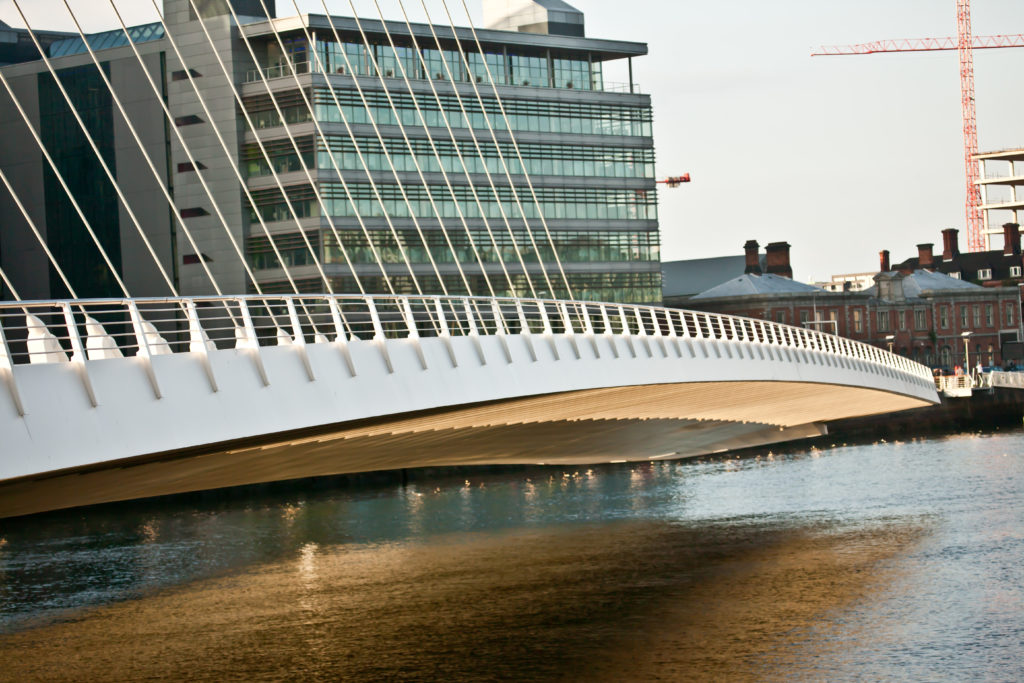 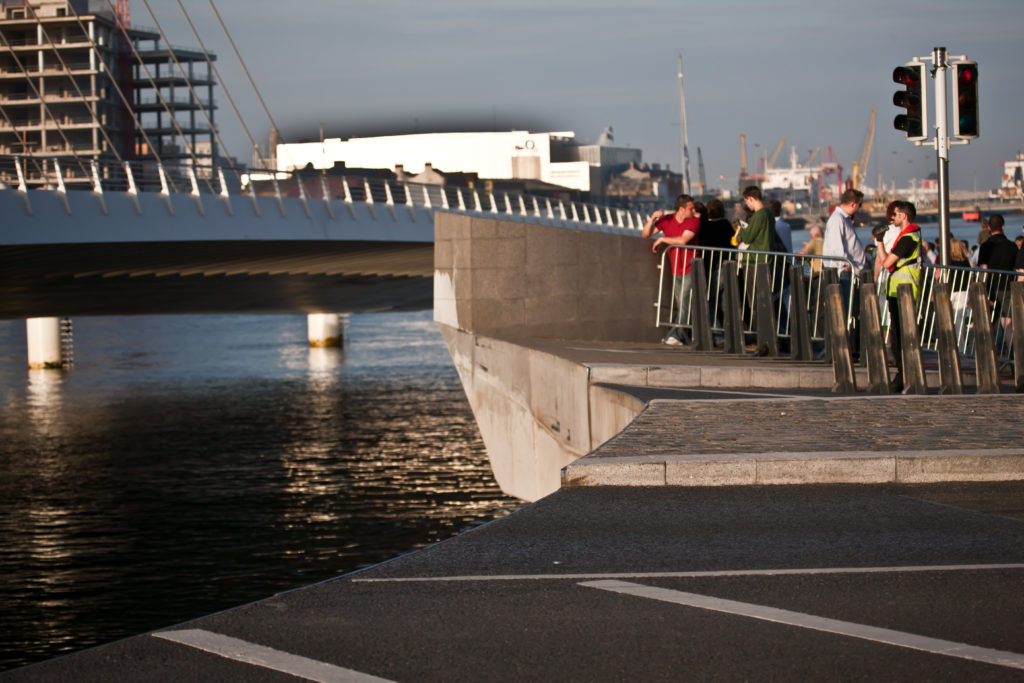 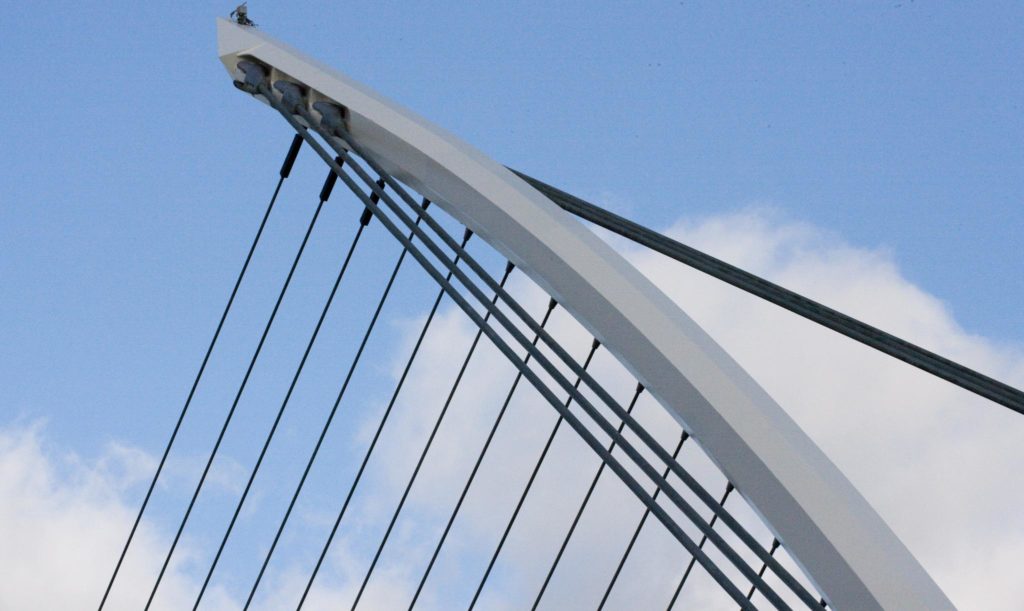 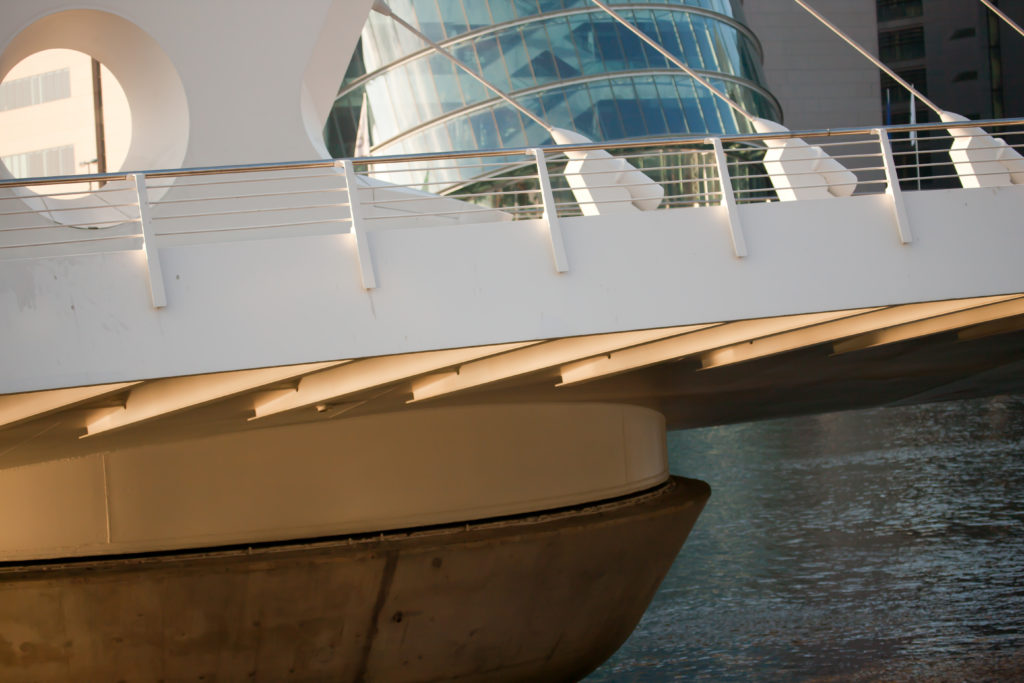 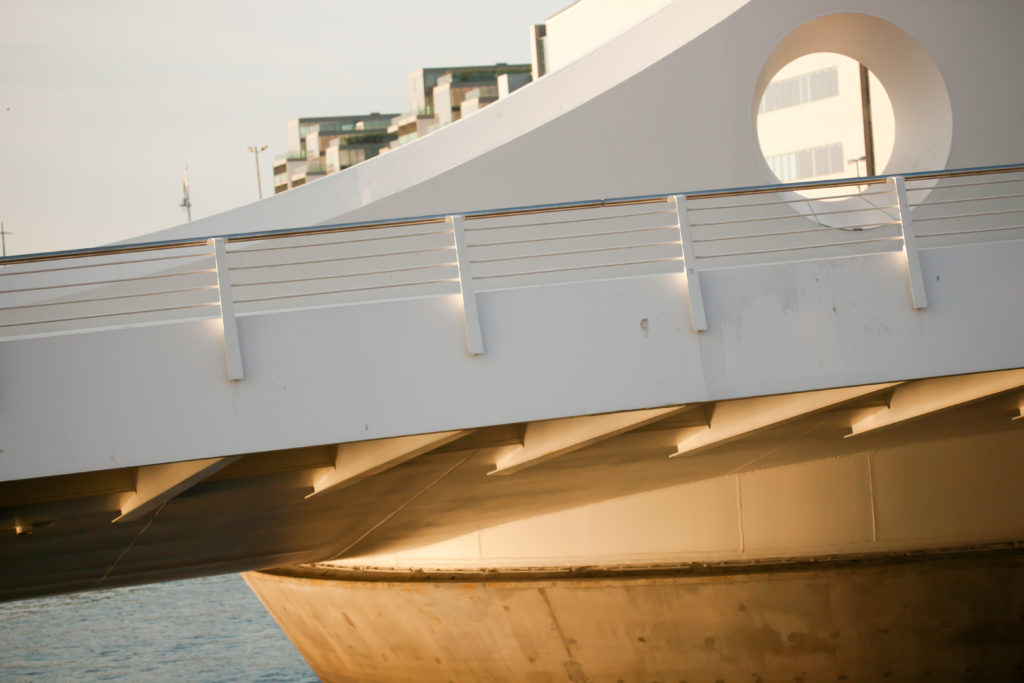