The construction of Santa Maria del Fiore Cathedral began in the 1290s, but the spectacular dome was built between 1420 and 1436, almost two centuries later. The name of the cathedral, Santa Maria del Fiore, combines that of the Virgin Mary with the symbol of the city of Florence, the Flower of Lis. The church is currently the fourth in the world by size after Saint Peter’s Basilica in Rome, Saint Paul’s Cathedral in London, and the Duomo of Milan. It meant the transition from the Gothic to the Renaissance style, witnessing over all those construction years the change in the way of building.

In 1418, building the dome seemed to be impossible, so competition for ideas was opened. This is when a renewed Filippo Brunelleschi, an ambitious 41-year-old goldsmith, appears with a self-supporting dome solution. Even though the Committee was very skeptical, Brunelleschi managed to convince its members. In April 1420, they gave him and two other candidates the work. One of the others was Lorenzo Ghiberti, a former Brunneleschi’s rival. Still, Filippo quickly took over the leadership and has gone down in history as the builder of the dome of the Florence Cathedral. He died on April 15, 1446, leaving no plans or writings of this great project. He is buried in the church.

From that moment, many have studied and theorized about how he managed to build it, and even an Italian professor has dedicated his life to replicating the dome (see references). What is known so far of this structure?

The cities of Florence, Pisa, and Siena were competing to build the largest cathedral, a symbol of wealth and power. The biggest the church, the biggest the crossing (junction of the four arms of a cruciform cross-shaped space), and the diameter of the domes covering them. Thus, Brunelleschi’s dome has an internal diameter of 44m and is 32 m tall, while the base is 52m high above the ground (this is like a ten-story house on top of a 17 one). It has, they say, 40 000 tons of bricks, on a stone masonry base about 4 m high. Also, the lantern above the central top opening is 16 m high.

The dome sits on a vertical wall called “drum”, which is, in this case, an octagon with an oculus (window) on each side. The intrados side of the octagon is about 17 m. This polygon shapes the dome in eight sectors, joined by arch edges. Each arch is generated with the method of the “Quinto acuto” as follows: the diameter is divided into five equal parts, making six division points. To create an edge, you have to draw an arch of circumference of radius 4/5 of the diameter (35 m in this case) centering at point 2. Then, with the center at point 5, you create the opposite edge. The arches top end is at an angle of 60o with the horizontal.

The lower part of the dome is made out of sandstone blocks joined with mortar and, at the height of 7 meters (an angle of about 10º with the horizontal), it changed on 1422 to a brick masonry construction.

The dome has two shells with a gap of 1.20 m between them, starting at the same height as the bricks. The main envelope, the inner one, has a thickness at the base of 2.25 m, while the outer one is only 0.80 m thick. The highest the level, the thinnest the shell, because it is less stressed. The inner shell finishes at the top with a compression ring, which has the lantern on top.

Both envelopes are connected between them, not only by the edges but by two more vertical elements in each sector, similar to them. The thicknesses of the intermediate elements range from 2.40 m to 0.40 m, while in the case of the edges, these dimensions are around double size. In addition, there are three corridors at different heights through which a person can walk, and an additional one at the top, inside the compression ring. Openings in the outer shell allow the light to go into the gap.

There are several horizontal elements throughout the height of the dome, such as three stone perimeter chains and a wooden one. It is unknown if they were arranged to resist efforts as a tension ring, but nowadays, we know they can’t work like that, especially cracked stone. There are also 9 horizontal arches in the outer shell, in the upper 2/3 of the dome, about 2.5 m apart, which are believed to reinforce this shell. Their thicknesses are almost null in the center of each sector. These arches are a change on the program of 1420, which planned on joining the two shells together vaults.

At the outside, around 30,000 red clay tiles are fastened with metal hooks on a layer of mortar. This design goes with the other buildings of the city, while the white marble edges stand out, giving the dome its own character.

In the fifteenth century, the city of Florence was very condensed around the Cathedral, still without its dome. Because of that, it wasn’t easy to put an exterior scaffolding to build the dome. On the other hand, a vast interior formwork that could support the full weight of the dome at that height would make construction too expensive and slow. Therefore, among all the proposed solutions, Brunelleschi’s was the winner: a self-supporting dome, that is, that supports itself during construction, and of course, when finished.

To achieve this, the brick bonding of the dome was crucial. As height is gained, the shape of the dome causes the bricks to start leaning inward, allowing them to slide.

The two techniques Brunelleschi developed and that generate a unique brick bonding, both contributing to the overall resistance of the dome, are the so-called herringbone (“spina pesce”), and the slack-line (“corda blanda”).

The herringbone pattern starts at the level of the second corridor of the dome. The idea behind it consists of breaking the weak horizontal planes created by the mortar layers, by means of placing vertical bricks. 2/3 of the height of each vertical brick overlaps with the previous one, following a diagonal line. It shapes a spiral around the dome. Although it may not seem so because of the octagonal shape, this diagonal line is actually a spiral that rounds the entire dome, continuously.

In 2012, researchers found a small dome near the Cathedral made with the same technique. Some theories say that this dome was a practice, a model, to check its buildability, although it is a circular dome (not octagonal).

One of the most broadly accepted theories of construction, by the Italian professor Massimo Ricci, is based on a drawing by Giovanni di Gherardo da Prato. The latter used to work with Ghiberti, and it was an opponent of Brunelleschi as well. He criticized his work with writings and drawings on parchment, suggesting that the dome would fall due to some mistakes

made by its designer. Thanks to his critical work, we have one visual document of the construction of Santa Maria del Fiore dome.

The construction theory is based on the use of guiding ropes. A flower with 8 petals was drawn on a platform, to which ropes were tied. As one end of the ropes run through the flower, the other end defines the dome wall. The ropes control the angle and height of the bricks, as the rope projects its curvature onto the wall, creating an inverted arc, which is the “slack-line” shape (like a catenary).

Thus, each “horizontal” plane of the dome is concave and inclined towards the center of the dome. Another theory says that it could be created by straight lines perpendicular to the shells. Extending these lines in our imagination, a cone with a lower vertex appears, which changes as the height of the dome changes.

In addition to this, Brunelleschi designed all kinds of construction machinery, for example, one to rise materials up to 50 m high, where the workers were building the dome.

Interior of the dome

Herringbone pattern in a circular base dome

Dome from the inside of the Cathedral 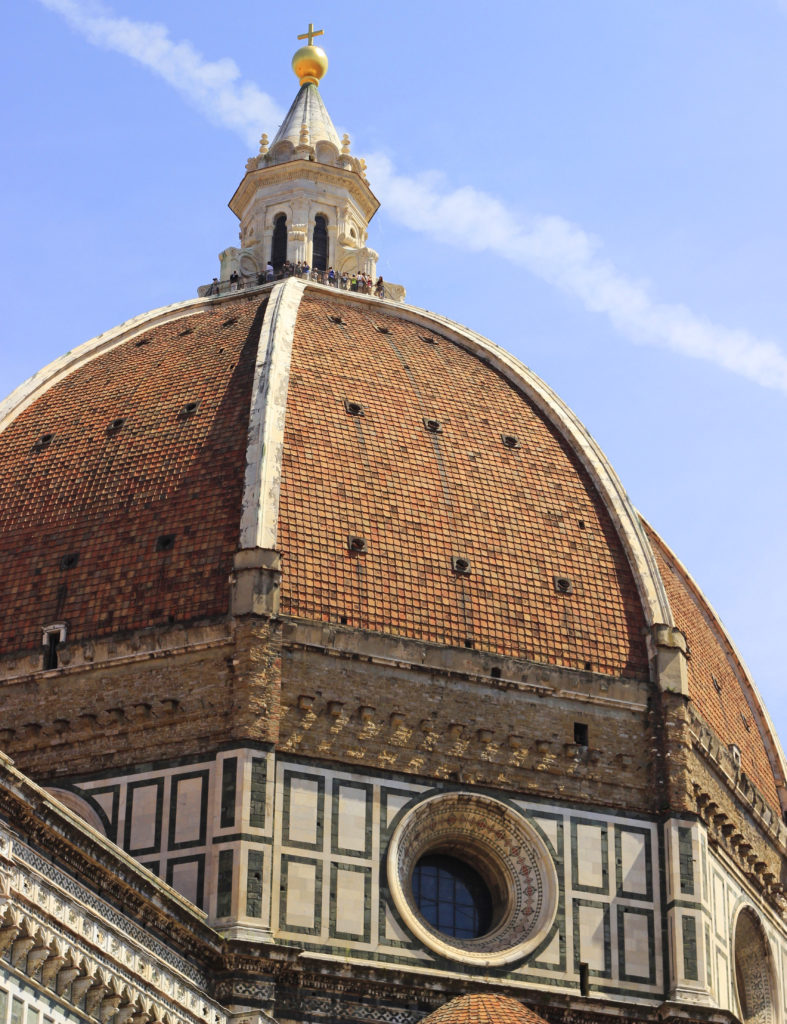 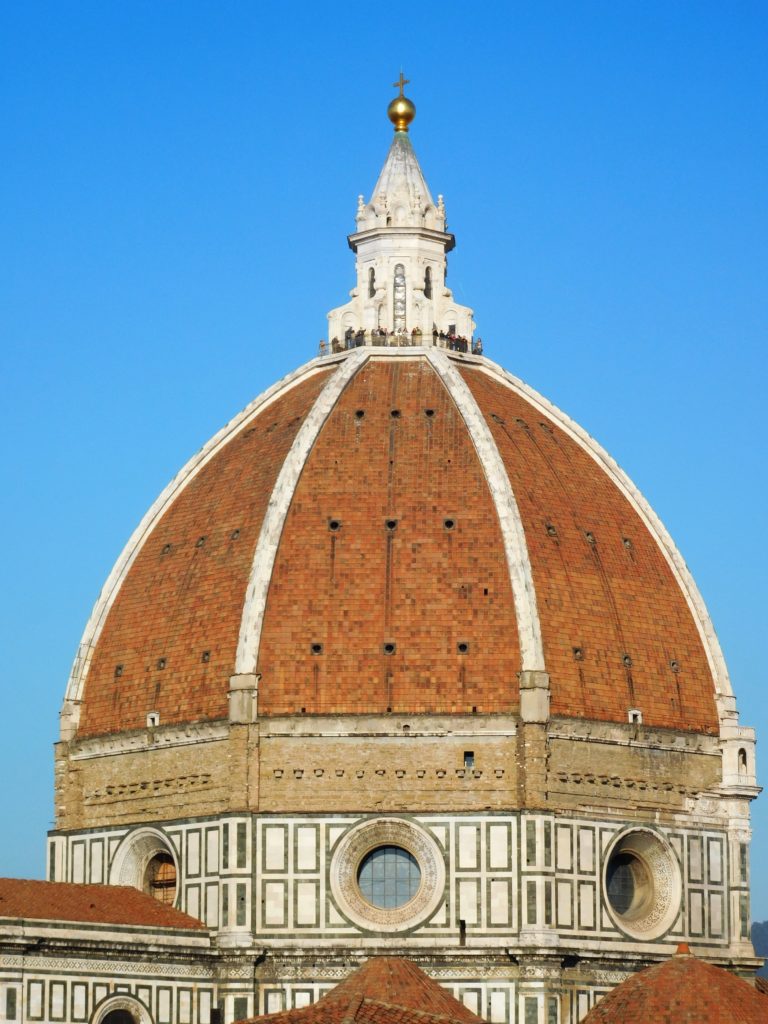 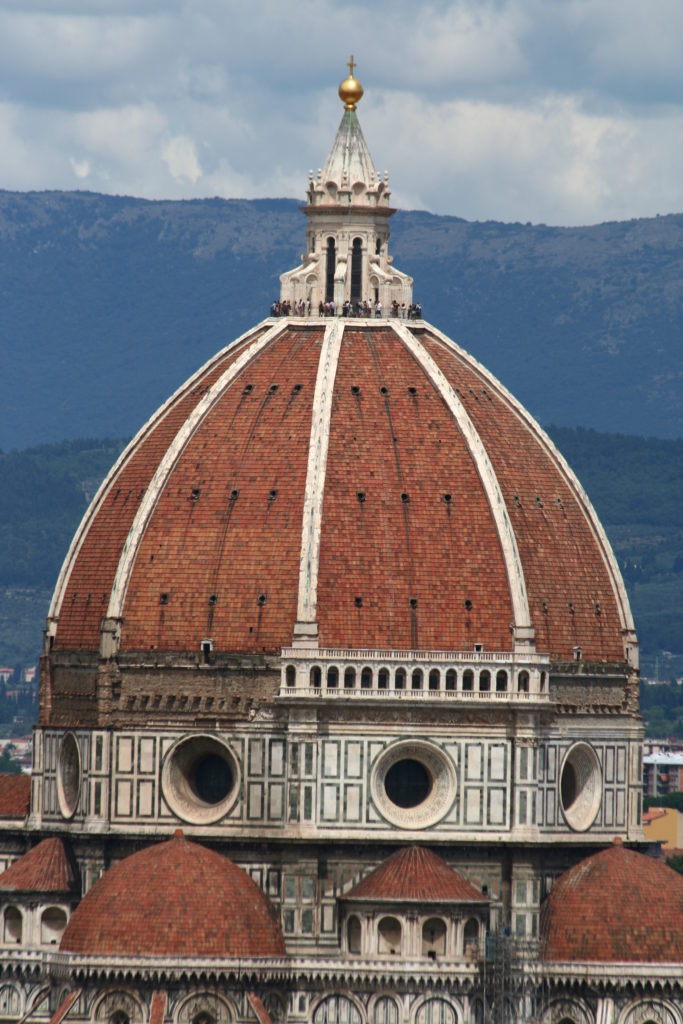 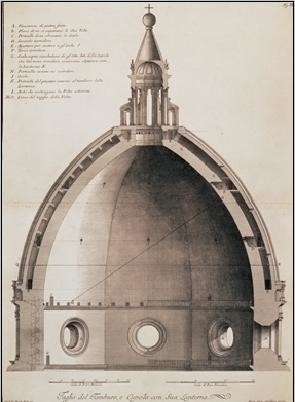 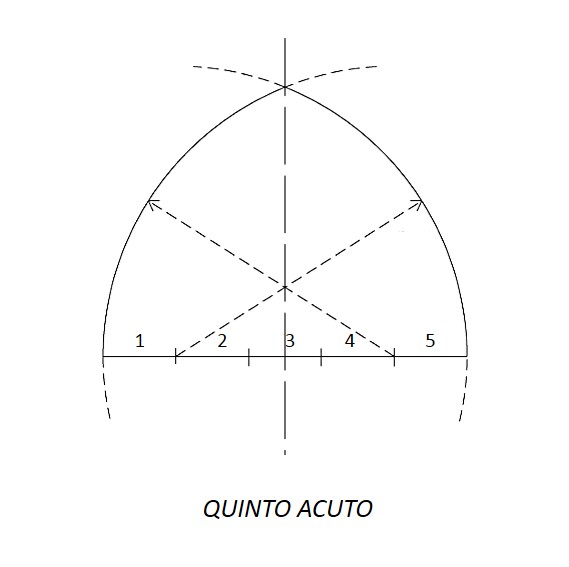 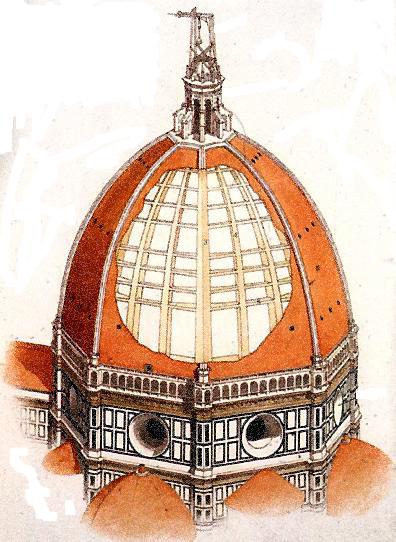 Interior of the dome 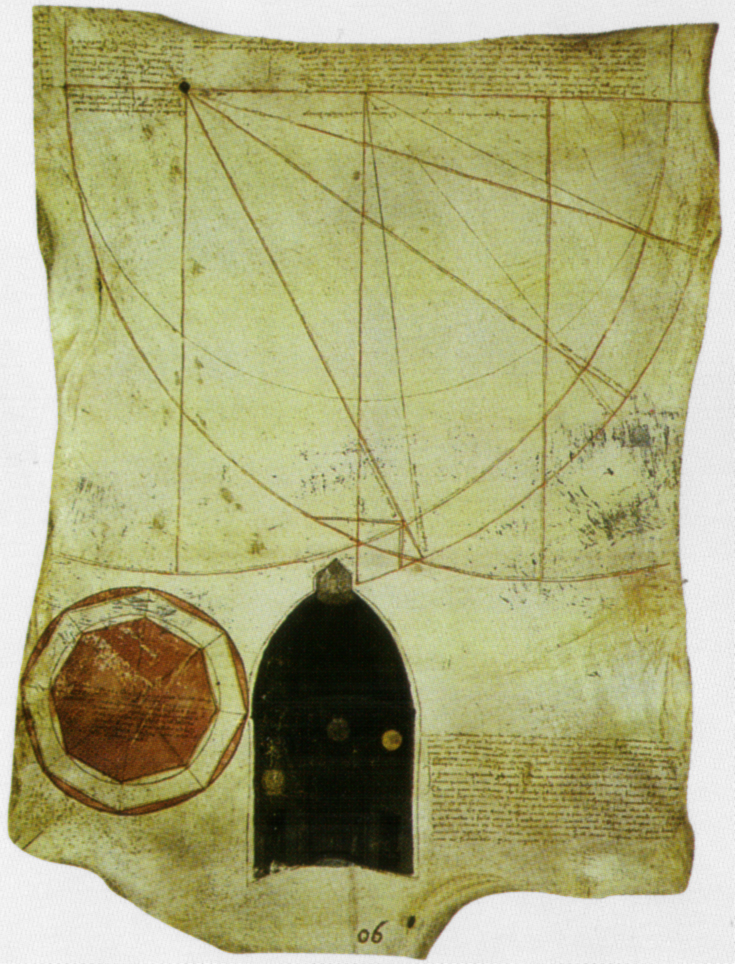 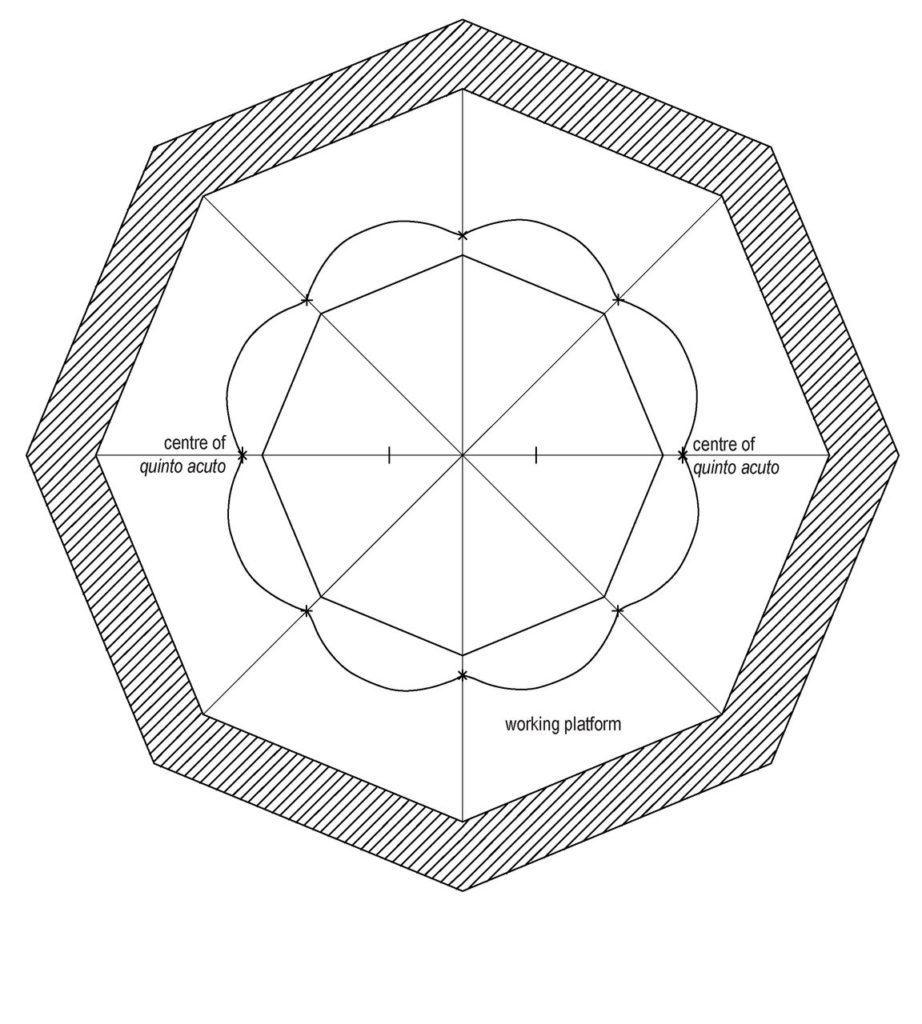 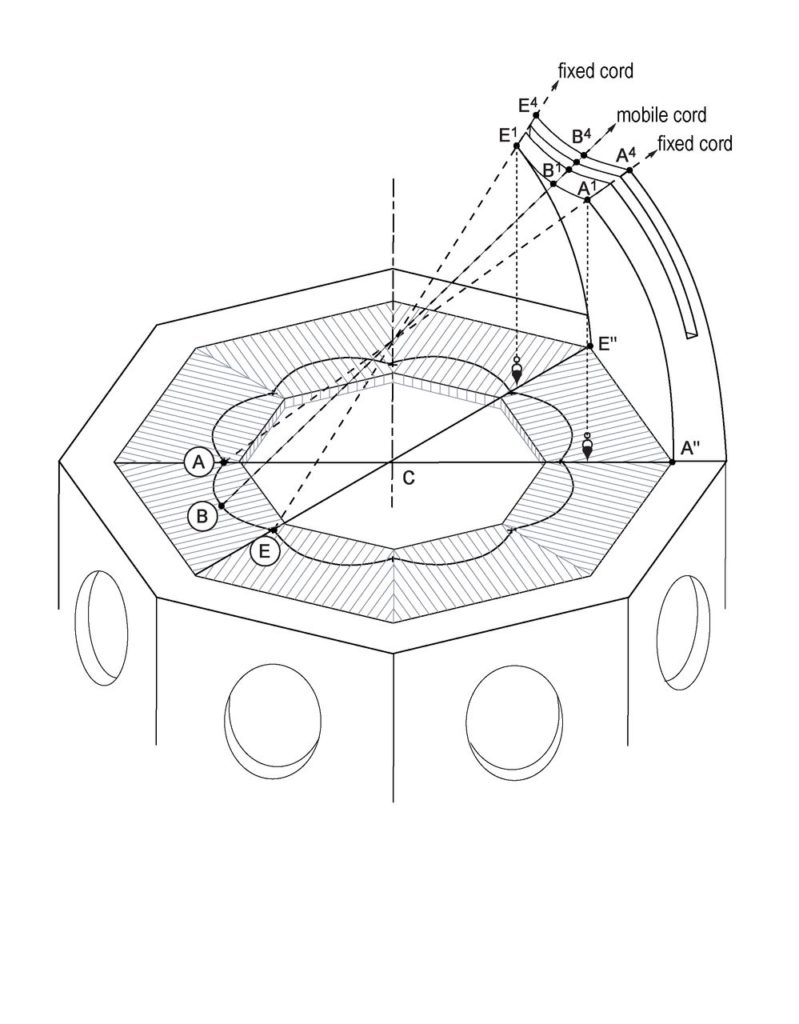 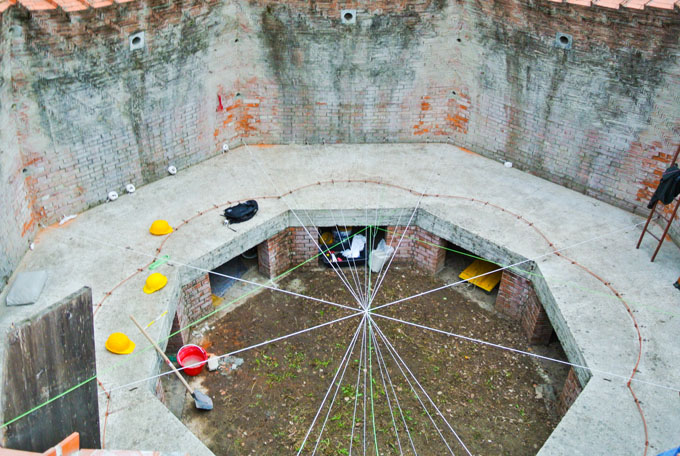 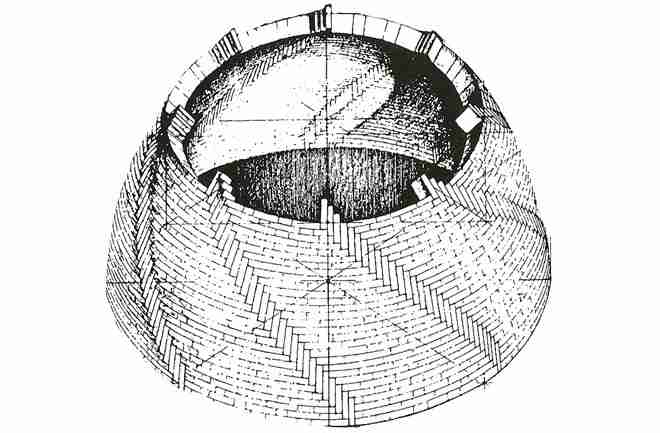 Herringbone pattern in a circular base dome 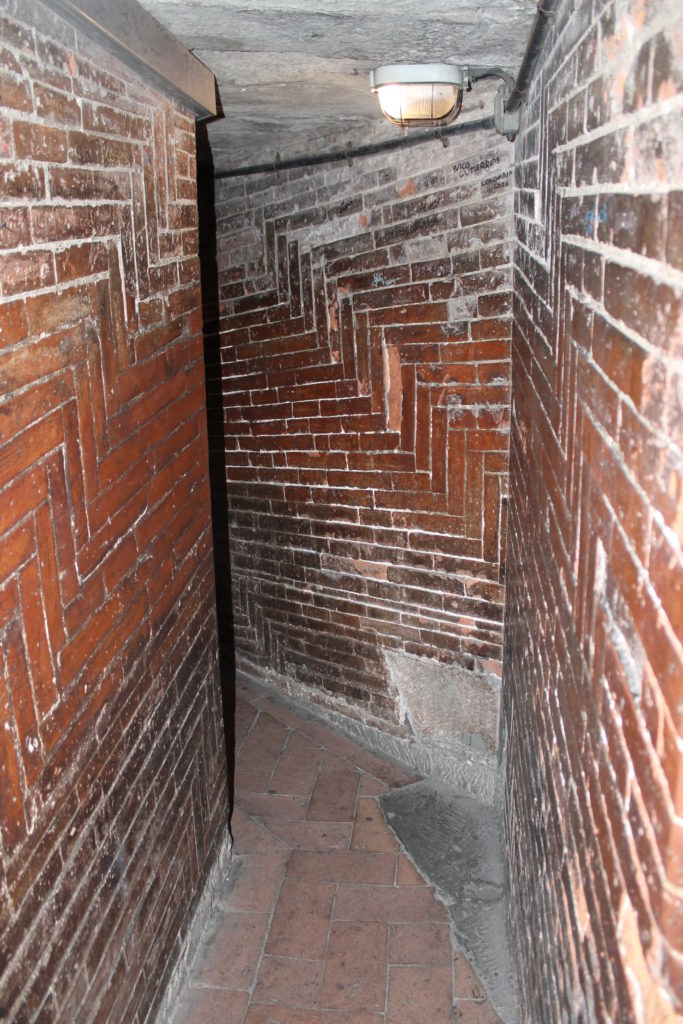 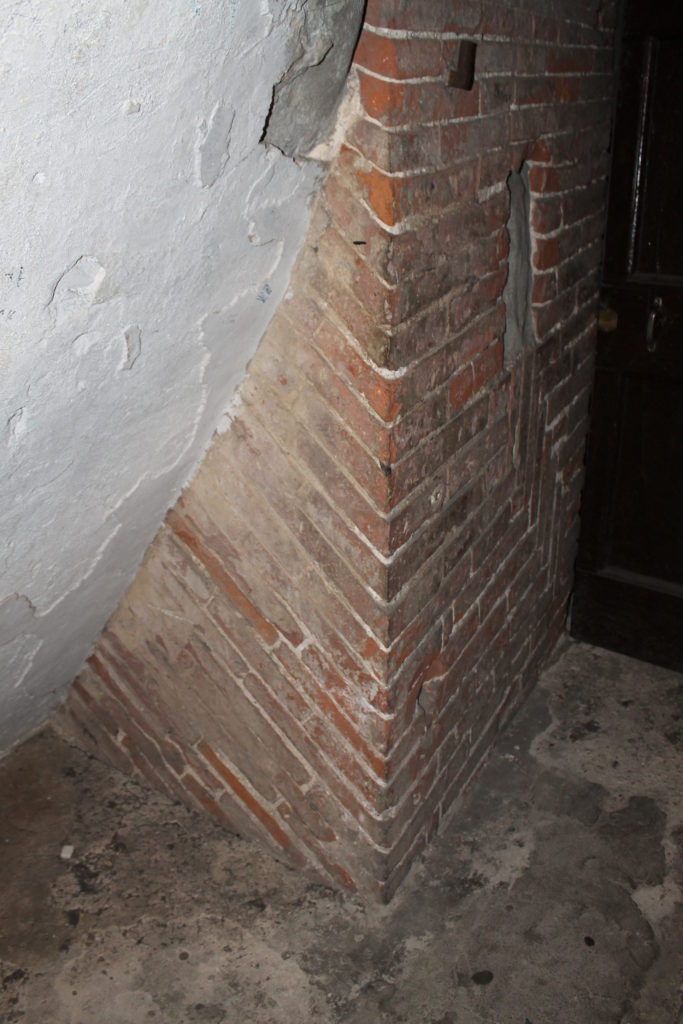 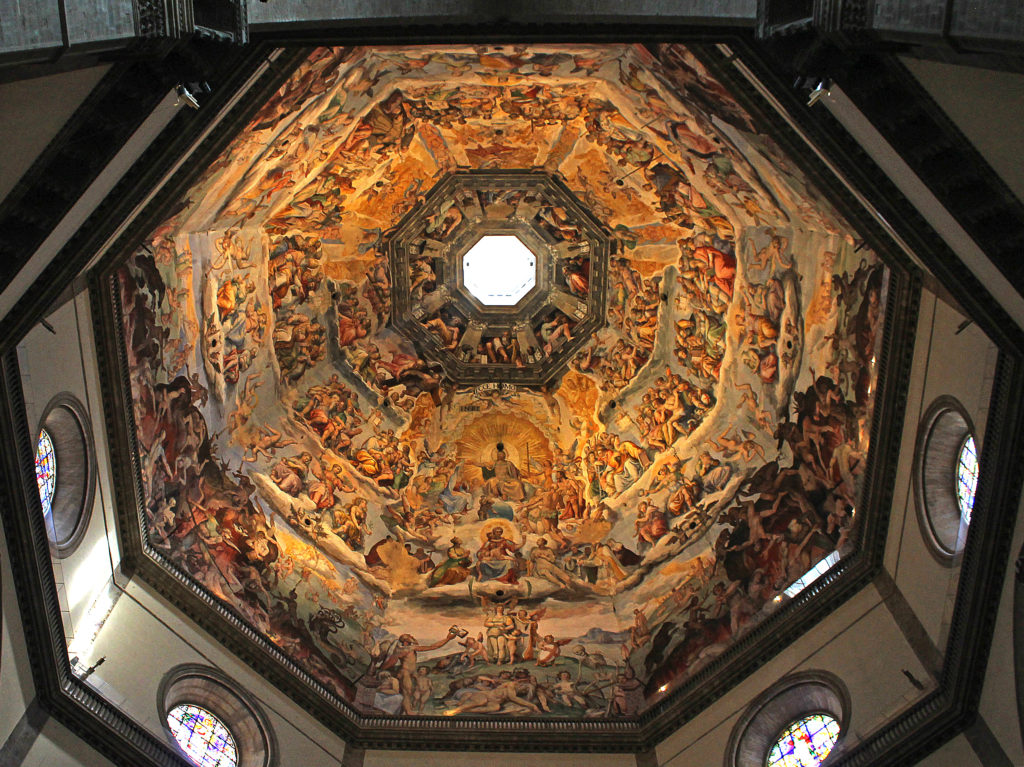 Dome from the inside of the Cathedral