The Comb of the Wind

“My sculpture, The Comb of the Wind, is the solution of an equation that has elements instead of numbers: the sea, the wind, the cliffs, the horizon and the light. The steel shapes are mixed with the forces and aspects of nature, they speak to them, they are questions and answers.”

This is what Eduardo Chillida said about his own masterpiece. The group of three sculptures placed on rocks called The Comb of the Wind is located in the north coast of Spain, at the western end of La Concha bay, in San Sebastián (Guipúzcoa, Basque Country). It has become one of the symbols of the city.

Chillida started working with iron in 1951 at Manuel Illarramendi’s workshop, in Hernani. He learnt there the Basque traditional crafting works and he combined this knowledge with experimentation. This led his style to the abstraction, aligned with artists like Pablo Picasso. He started the forenamed series of sculptures in 1952. Until his death, in 2002, he made 19 sculptures. The ones described here were the 15th group.

The three art pieces weigh 10 tons/each, and they were placed in their rocks between August 17th and September 3rd, 1977. The Spanish civil engineer in charge was José María Elósegui Amundarain, together with his office team. Elósegui and Chillida knew each other before working together, as their families had a good relationship. Let´s see the great engineering tasks involved in the process of placing the sculptures, and the beautiful links between artists, nature and engineers.

Imagine we are standing at the end of today’s known as Eduardo Chillida Street, looking at the sea. We can clearly see the three sculptures. The closest ones, one on the left and one on the right, look at each other, horizontally disposed, representing a return to the past. The one placed at the farthest rock, in the middle, is an assertion to the future.

The sculptures have a prismatic trunk divided at a certain height into four arms, bent in different shapes. The arms have different lengths and the three sculptures are placed in a different way. Even though they all share a common challenge, which is dealing with its 10 tons weight, each of them has its own. The technical solution to fix them to the rocks was by means of tensioned anchors embedded in the rocks. Surrounded geology is characterized by “Facies Flisch”, of the Eocene geological period, having different strata, even though sandstone withstands.

The design of the sculptures changed over time. In the beginning, there was going to be just one art piece, placed in a vertical position (that´s why it’s called the Comb, which is a singular name). The design evolved to the three we see, as number 3 had a special meaning for Chillida. After some tests with prototypes, the horizontal disposition (cantilevering) for the one on the coast, to the left, was decided. This was not easy to hold. José María Elósegui proposed to extend the lower arm deeper into the rock.

The other two sculptures are not placed on the coast, so one of the challenges is reaching the corresponding rocks.

The central sculpture, vertical, shaped like a steel tree, is the farthest one… 80 m far from the coast! They had to build a metallic temporary bridge, with supports at different levels as the seabed is irregular. It had to withstand winds and tides as the big cart transporting the sculpture circulated on top of it.

Lastly, “the Chillida rock”, the one where the sculpture on the right was placed. It had (and has, as shown in the pictures), a big crack that had to be reinforced to avoid a big rock piece and the sculpture to slip and fall into the sea. Five iron bars, 6 meters long, cross the crack like sewing it. This previous preparation started in May 1977. Another temporary bridge, 10  m long, was built for this one.

Some parts of the construction process have already been described. At the very first moment, the rock on the right had to be reinforced. Five holes were made, the bars were placed, and resin was injected to fix the anchors. For the other two rocks, no previous reinforcement was needed.

Big holes for the trunk and one for the arms were made with the use of a template.

To move the sculptures, clamps were put in the arms, so a crane could hold them. The corresponding parts of the art pieces were inserted in the holes with big precision. For the horizontal sculptures, a system was designed to hold them in place until the resin hardened. For the left sculpture, 8 m long temporary anchors were executed (4), while the sculpture on the right had four, 10 m long, in addition to the permanent ones. This temporary system was completed with a base plate in the top arm. After the anchors were stressed, the crane could release the holding. Once the resin hardened, the sculpture was cleaned of temporary elements, this is, the base plate was removed, and the heads of the anchors were cut. The sculpture seems to be clamped to the rock.

For the central sculpture, a reinforcement was made for the rock because the big holes made for the trunk and arm weakened it. Two anchors 5 m long were inserted.

Two temporary bridges were built. The one used to reach the rock on the right was 10 m long, and it allowed to transport the sculpture as well as the tools and machines needed for the installation. It was made by ULMA.

When facing the problem of reaching the farthest rock, some solutions came up such as placing the sculpture using a helicopter, transporting it on a floating structure, etc. They finally decided to build a metallic bridge with 5 spans, which was supported at different levels by means of concrete footings that were removed afterwards, respecting the environment. It was designed as railings, and they took some train sleepers from San Sebastián North Station that were returned when the construction finished. At the end of the bridge, next to the rock, a frame with a pulley was placed. Using this system, they could take the art-piece from the cart where it was being carried, and rotate it to put it vertically in the defined position. Then, it was carefully lowered and inserted into the holes. As in the others, the holes were filled in with resin.

Construction companies involved, in addition to the office of the engineer Elósegui, were: Moyúa Constructions as main contractor, ULMA and AYALA cranes for temporary works, and SITE for anchors.

The total construction cost, without the cost of the sculptures, was 8 million pesetas (48 000 €).

The material used for the sculptures was corten steel or weathering steel, specifically the one called Re-Co steel. Its main characteristic is that it forms a stable rust coat around the piece, avoiding the rust to go farther inside the steel. The main advantage is that no painting or other rust protections are needed. It has a red-orange color. The main disadvantage, in this case, is that water takes out some particles of the protective coat, which stain with orange rust the rocks where the sculptures are placed. 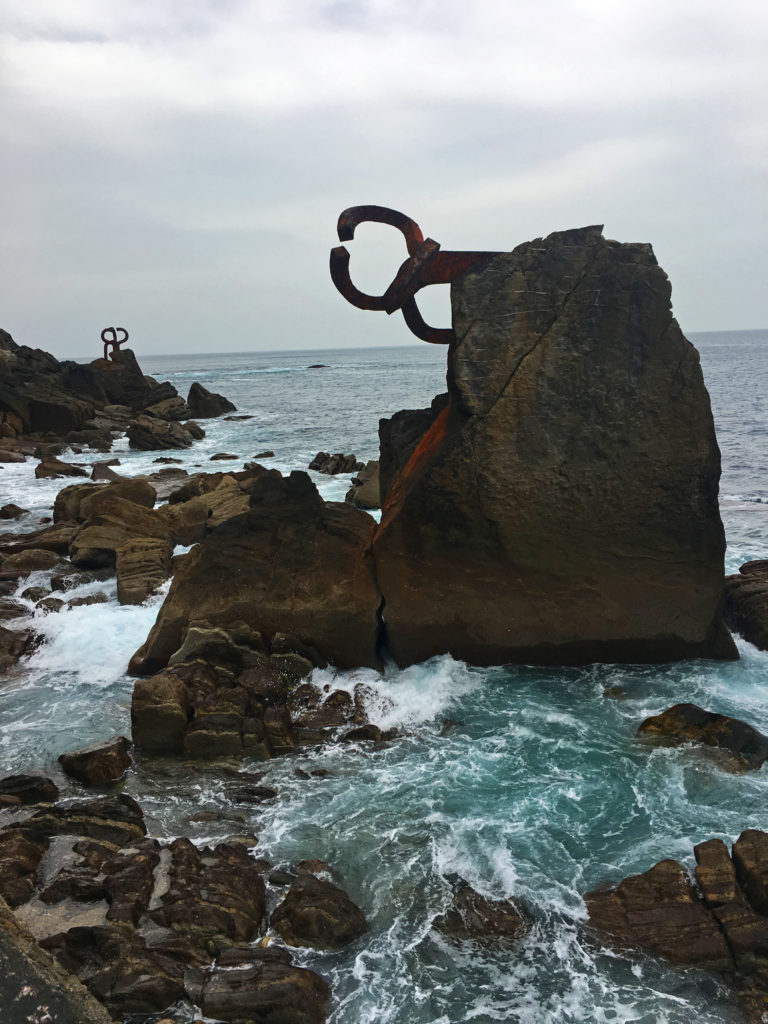 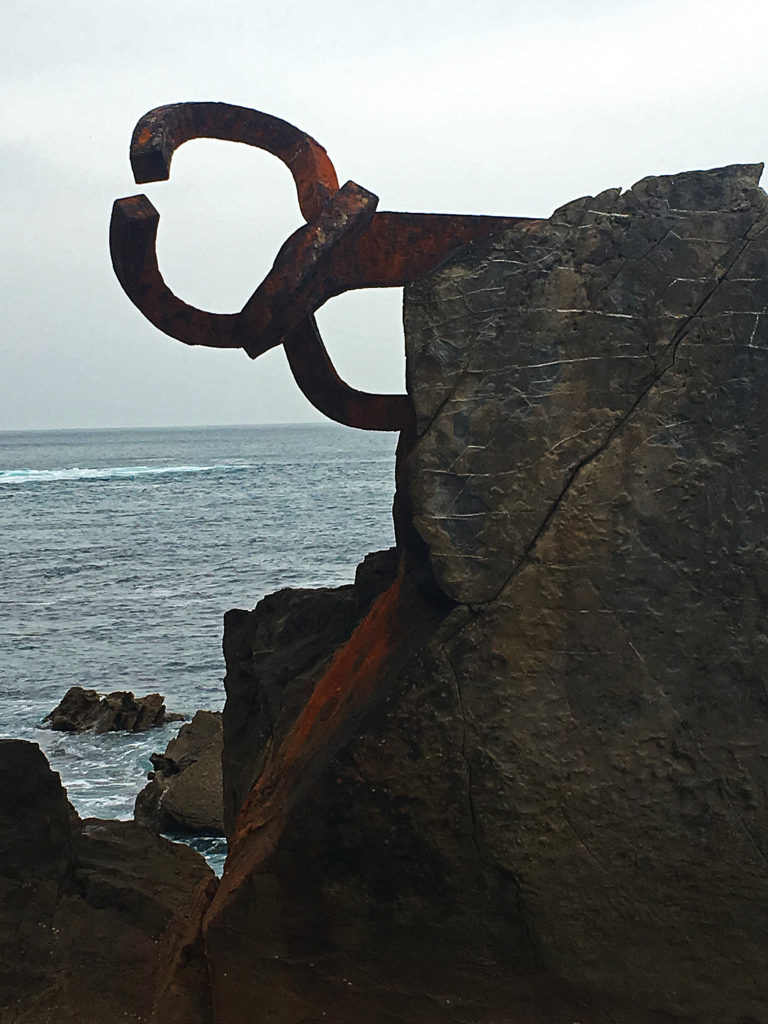 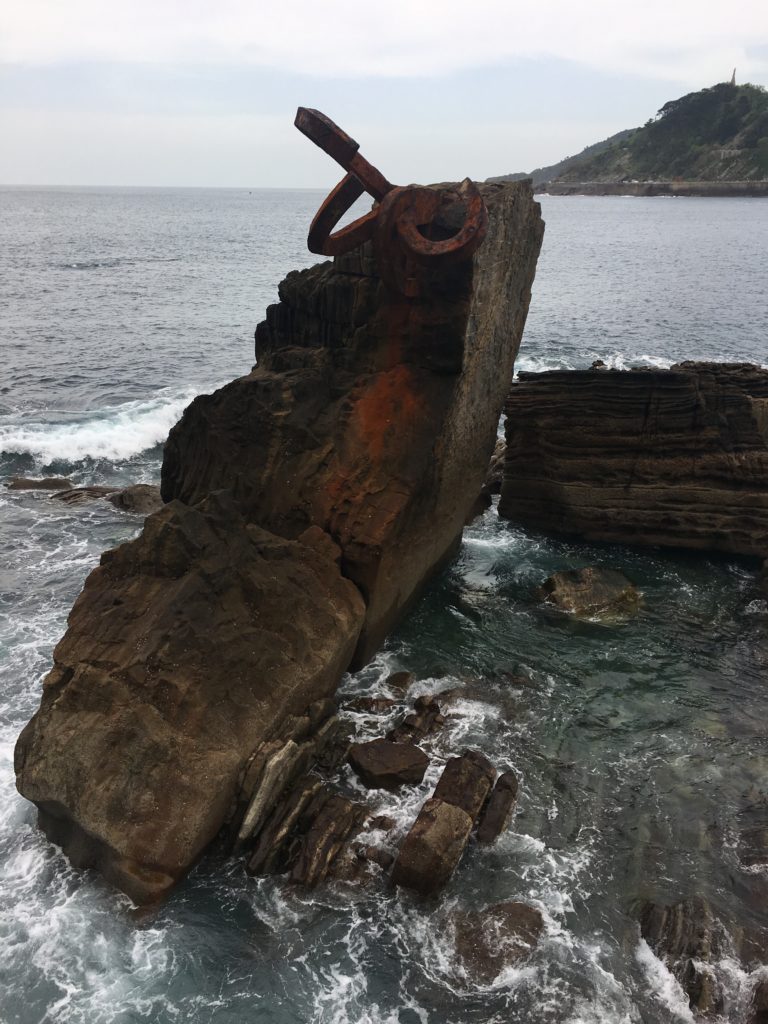 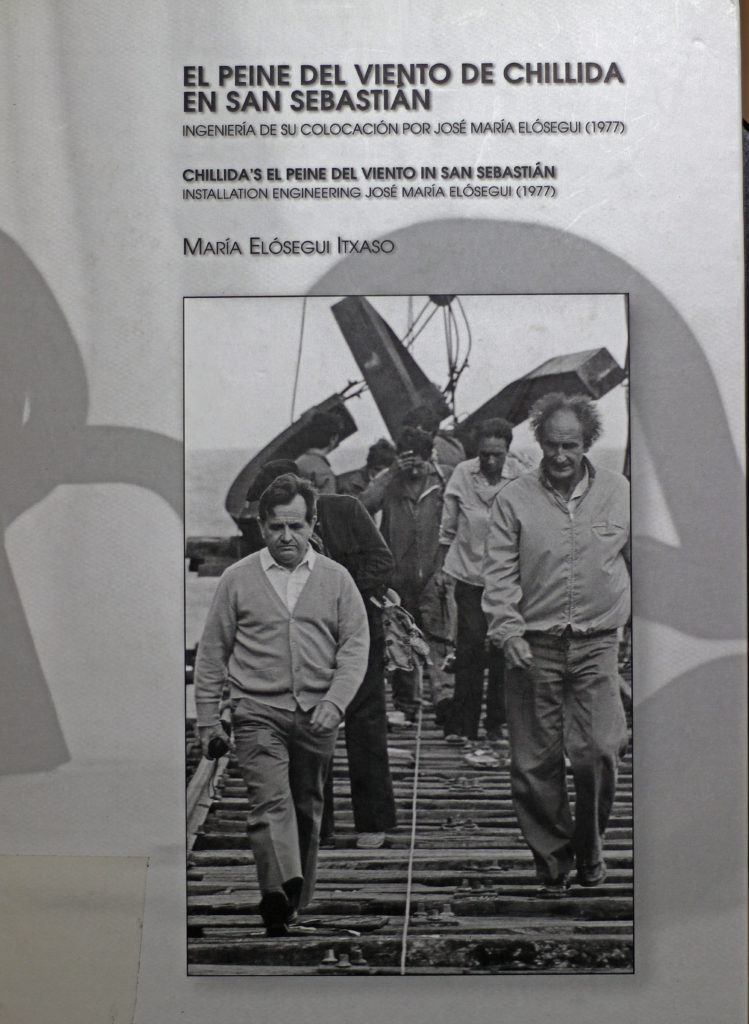 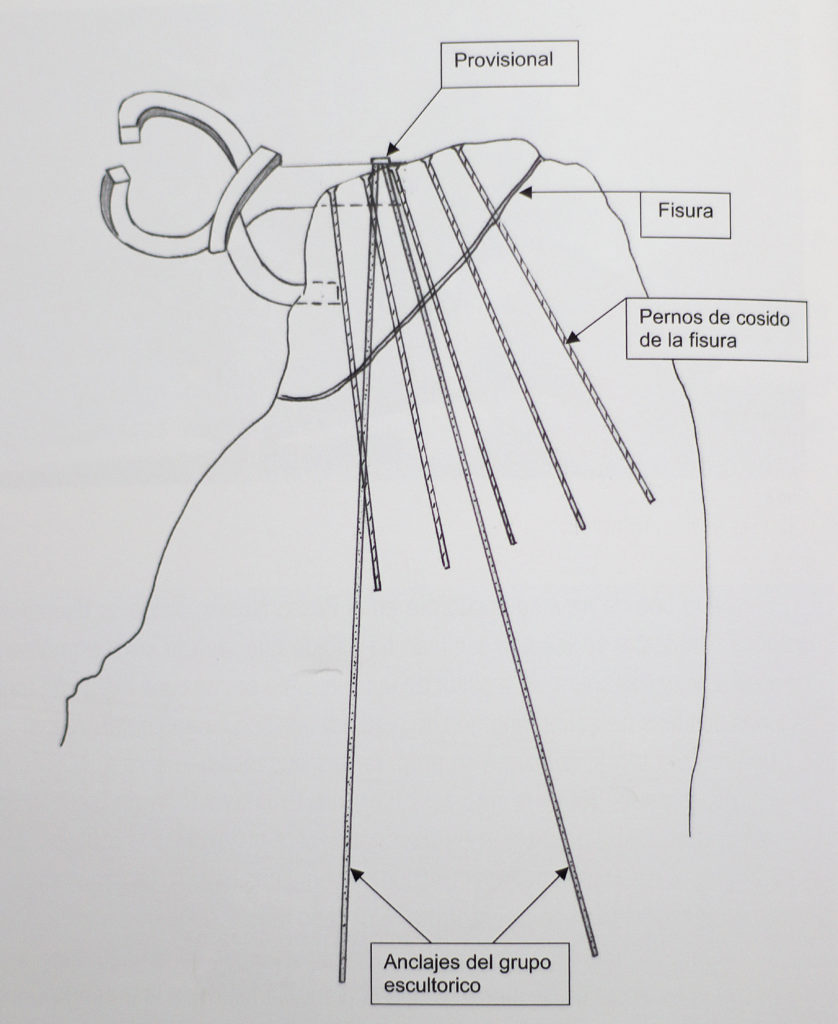 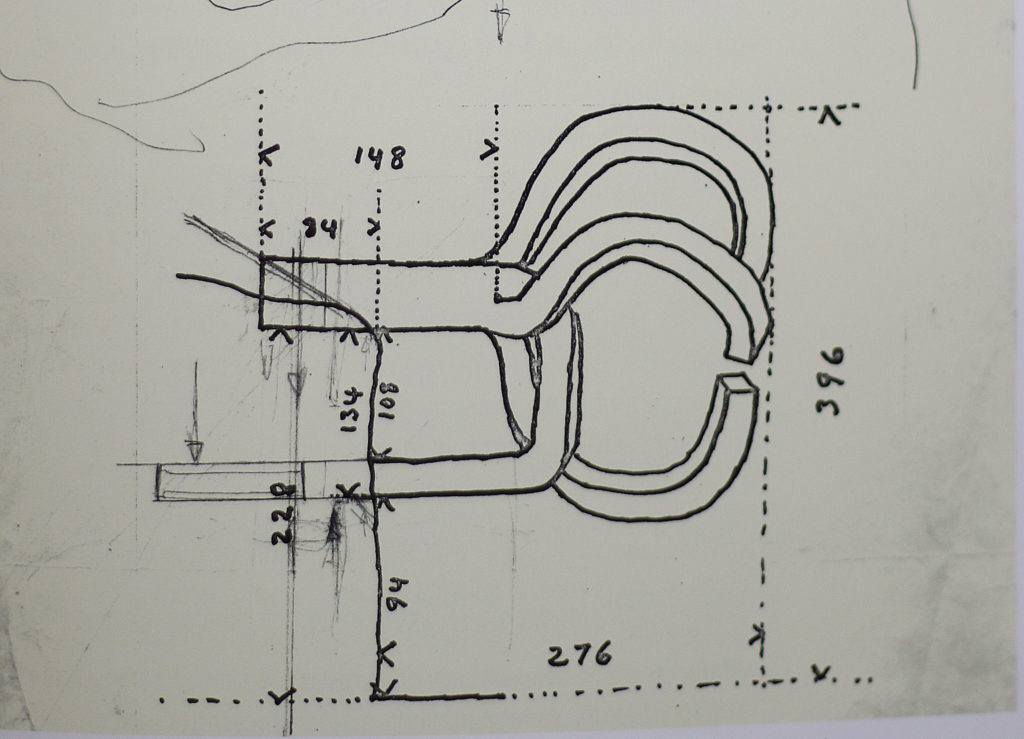 The Comb of the Wind